You are at:Home»Current in Carmel»Carmel Community»Spartz runs for 5th District to fix ‘broken’ Congress

Victoria Spartz was a late entry for the Republican nomination for Indiana’s 5th Congressional District.

That’s because Spartz had a tough decision to not run for reelection for her state senate seat. She was elected by a caucus in 2017 to fill out the remainder of Luke Kenley’s term when he retired. 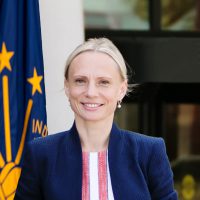 “I hated to leave my Senate and I love my legislators here, but working on a few major issues recently, including health care and education, I realized if we don’t fix our issues legislatively – not by executive branch at the federal level – we’ll never be able to fix all of the underlying issues we have,” said the Noblesville resident, who announced her decision to run Feb. 5. “We are piling up debt because no one wants to work on problems, just putting bandages and patching the problems.

“Most of these issues are controlled at the federal level because the states have relegated a lot of rights, so we have to provide more flexibility and give states more options to work on these issues.”

Spartz said she is working on major health care legislation.

“We are going to pass some good bills, but they are going to be effective for a very small part of the market,” Spartz said. “Everything is now federally regulated and we have to push it back to the state. Everything is done through executive orders, and while I might like them today, I might not like them tomorrow. Congress is broken and the legislative branch is not performing their function on what they should be doing. Executive branch shouldn’t be legislating, it was never meant to be. That way it doesn’t go through all the due processes.”

Spartz said it is supposed to be hard to get things done in the legislative branch.

“We’re going to start to deliver results, but we have to do that at the federal level, too,” Spartz said.

Spartz said she has experience on how to get things done in the legislative branch.

“I feel having business experience and also having been an effective legislator, that takes both to deliver results,” she said. “People don’t understand how hard it is. You fight a lot of big special interests and fight a lot of big monopolies. You also have to make sure your colleagues stay with you with this issue and are willing to fight.”

Spartz and her husband, Jason, own several businesses, including a commercial farm. Spartz was a CPA at a Big Four accounting firm and served as chief financial officer for the Indiana Attorney General’s office.

Spartz moved from her native Ukraine to Noblesville 20 years ago when she was 21. She had met her future husband on a train in Europe.

“I grew up in a socialist system, and we’re moving in that direction,” Spartz said. “I understand how bad it is.”

Spartz said she has a successful record of starting from the bottom and getting things done in several areas.

Spartz said she would regret if she didn’t run now to fill the spot, which will become open with the retirement of incumbent U.S. Rep. Susan Brooks.

“I’m fine with whatever voters decide. I don’t need this job,” Spartz said. “I have businesses to run. I have my family. I have a lot of things in life I need to accomplish. I need to make my case.”

For more, visit spartzforcongress.com. See a full list of candidates for the May primary at youarecurrent.com/2020/02/13/candidates-set-for-may-primary/.