You are at:Home»Current in Fishers»Fishers Community»Funk lands dream job at Fishers

Curt Funk had his eye on the Fishers High School football coaching position for quite a while.

“I said to myself if the job ever opened up, I would apply for it and do everything I can to be the next coach at Fishers because I think this would be a great place to coach, teach and raise a family,” Funk said.

Funk got his wish. He was hired as coach in February and began working at Fishers as a physical education teacher Feb. 24. 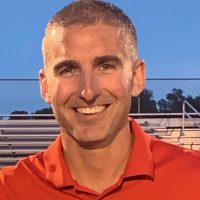 Funk had been the football coach at Mississinewa for 10 seasons, leading the Indians to a 77-36 record and Class 4A sectional championships in 2017 and 2019. He replaces Rick Wimmer, who resigned in December 2019 after 14 seasons. Wimmer, 63, was the only coach Fishers had since opening in 2006. His 2010 team won the Class 5A state title.

Funk said it has been good to start working at the school this school year and get a head start in knowing the players.

“The kids have been working hard in the weight room,” Funk said. “The previous coaching staff’s assistants have been good about helping the program move along without a head coach. The strength coach, Josh Jones, does a tremendous job with the kids in the weight room. The staff is not fully set yet, but I feel like we have a lot of pieces in place now.”

In addition to football, Funk was wrestling coach for Mississinewa the past four seasons. He last act at Mississinewa was coaching in IHSAA State Wrestling Finals Feb. 22. His son, Kyler, a senior, finished in seventh place in the 195-pound class.

Prior to Mississinewa, Funk was a teacher and assistant coach at Mooresville, Muncie South and Bluffton High School.

Funk, a Bluffton native, is a 2003 graduate of Purdue University. He and his wive, Janette, also have a younger son, Camden, a sixth-grader.