You are at:Home»Current in Fishers»Fishers Cover Stories»On the lookout: License plate readers on 96th Street to potentially deter crime

Enhancing the 96th Street area has been a focus for the City of Fishers for quite some time, according to Mayor Scott Fadness.

“We really want to focus on redevelopment and creating a more vibrant corridor,” he said. “We’ve invested a significant amount of money and have one of our larger road projects going in on 96th Street from Cumberland Road all the way back to the (I-69) bridge, basically, so you’ll have brand new public infrastructure, a brand new corridor,” Fadness said.

96th Street will be reconfigured to four lanes from Cumberland Road to I-69. Greenspace and medians will be added. Construction begins this month. Sections of the road will be closed at various times throughout the process.

Economic development accompanies the infrastructure improvement. A site at 96th Street and Lantern Road has been empty since Marsh Supermarket vacated in 2017. City officials have worked with different developers to find the best solution, which has includes Indianapolis-based developer Strongbox constructing a fitness facility, a retail portion and implementing initiatives to deter crime on the Indianapolis border.

“With that, we thought we had a real opportunity there to recreate what was an older suburban development, so we want to see more greenspace, revitalization of the parking lot, and one of the conversations we started having is, if we are going to see redevelopment of this corner, what are the types of things from a public safety perspective that could enhance the area?” Fadness said. “We asked the police department to sit down with the developer and ask different things to be done, and one of those was simple, like windows facing the parking lot to deter crime. And one of those ideas was (for the developer to) provide for electronic license plate readers along this busy corridor as well.”

Strongbox requested a waiver of impact fees from the City of Fishers. In exchange, it agreed to invest in four license plate readers for the 96th Street corridor.

“We can’t say where they will be located, and part of that is the entire road will be reconstructed, so that’s going to change the widths of road and everything else,” Fadness said. “Location will be determined at a later date.”

The readers work by using infrared beams, which reads license plates as motorists pass by. Vehicles with stole plate numbers or vehicles driven by individuals with warrants will be reported to the FPD.

“The spirit and intent for these license plate readers for the City of Fishers was really the ability to have additional information in case there would be criminal activity on that corridor, something as simple as car break-ins,” Fadness said. “This is not to catch you speeding.”

“It’s not a big brother, that’s not how the system works,” Gebhart said. “I think it’s always good to let people know there are monitoring systems. There won’t be officers just randomly searching info. It’s not built that way. It’s not for that purpose.”

The license plate readers will be installed when construction on 96th Street is finished, likely late 2020 or early 2021.

FPD has one license plate reader installed on a police cruiser.

“License plate readers have been around for quite a while,” Fadness said. 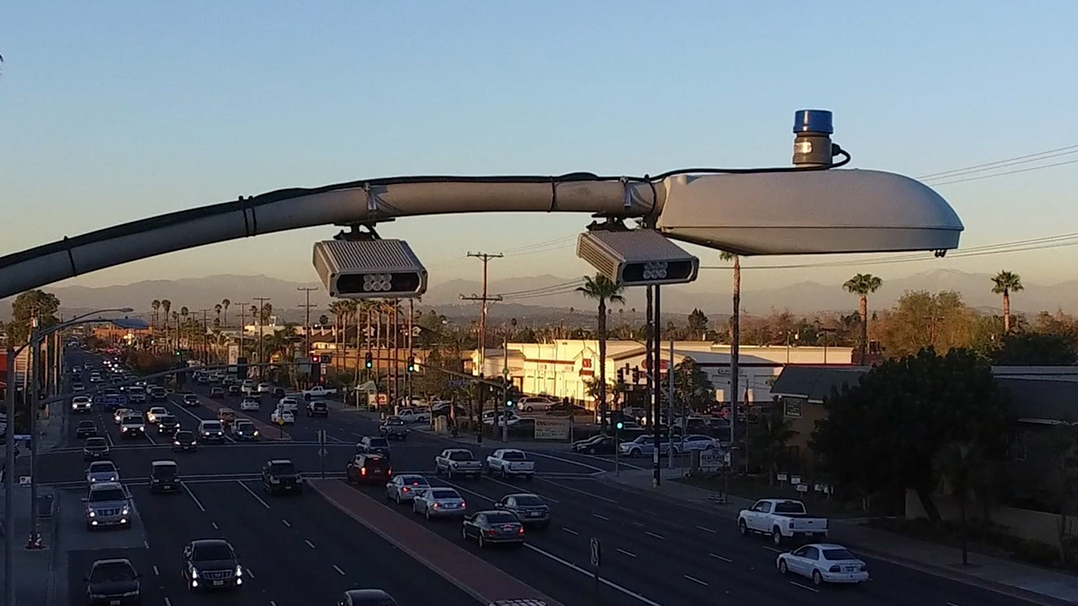 An example of the license plate readers to be installed on 96th Street. (Submitted photo)

Mayor Scott Fadness said the stretch of 96th Street on the City of Fishers’ south border has undergone significant commercial development, which lends itself to petty theft.
“When you have a lot of large retail areas with parking lots and a lot of transient use, there’s more opportunity for those types of things to happen,” Fadness said.

Installing license plate readers will be a proactive approach by the city to deter crime.

“What I’m excited for now is, not only have we taken a proactive approach with the license plate readers, the public infrastructure will be significantly changed, and we will start to see private development and redevelopment,” Fadness said. “When you have all three of those things working together, you have an opportunity to really do some exciting stuff.”