You are at:Home»Current in Zionsville»Zionsville Cover Stories»The trials of Zionsville: How businesses and restaurants are coping with closures

Indiana restaurant and business owners were forced to readjust their business plans within hours March 16, leading to an unprecedented time of uncertainty, local business owners said.

To combat the new coronavirus, on March 16, Indiana Gov. Eric Holcomb directed some Indiana restaurants, bars and other entertainment-related businesses to close to dine-in customers and others to close indefinitely, all starting the following day. The directive is set to continue until at least the end of the month. The Centers for Disease Control and Prevention also suggested March 16 that American citizens not congregate in gatherings of more than 50 people for eight weeks.

Ron Hopwood, co-owner of Hopwood Cellars Winery, and Steve Cousins, owner of the Papa Murphy’s in Zionsville and Nature’s Choice Landscape, Garden Center and Landscaping and Garden Center in Brownsburg, agreed that the shift would mean significant changes for local businesses, including their own.

Hopwood Cellars Winery will condense its hours to 2 to 6 p.m., seven days a week and cancel many of its previously planned entertainment events, while still offering carry-out orders. Papa Murphy’s will remain open and attempt to minimize human contact through its “take-and-bake” business model: Customers order their food beforehand and it’s ready when they arrive. Many more restaurants and businesses also were forced to change their operations.

“We still have bills,” Hopwood said. “Our bills are still coming in.”

Hopwood said owners are now tasked with the challenge of paying operating costs, property owners and employees with only a fraction of their typical business revenue.

“The owners are going to dip into their own pocket now,” Hopwood said. “Most owners here in Zionsville are pretty smart to where I’d imagine they have a bit of a nest egg for this type of a situation, but it’s still going to hurt them greatly, I’m sure of it. (The money) has to come from somewhere.” 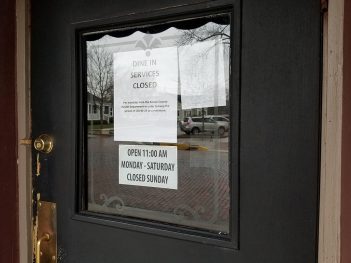 The Friendly Tavern posts signs announcing the temporary closing of its dine-in options.

Hopwood expects most businesses to survive until the end of the month, but he predicts things will become less certain the longer the closures last. If the closures last for multiple months, Hopwood said there would be “major problems” across the nation, including higher unemployment, permanent business closures and systemic financial woes.

“I think we are going to feel the ripple effects of this for the rest of the year. especially here in Zionsville, these small businesses,” Hopwood said.

The directives came a day before St. Patrick’s Day, limiting the number of in-person interactions among residents. The Friendly Tavern, a Zionsville staple, had planned its annual St. Patrick’s Day tent party for March 17, but the directives brought an abrupt halt to the event, leaving the restaurant with 700 pounds of cooked corned beef to try and quickly sell. 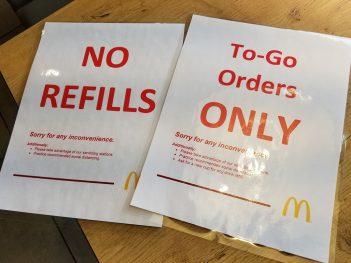 Joel Kelly, shift manager at the McDonald’s on Oak Street, said 80 percent of the store’s sales come from its drive-thru orders, so he believes the store will not be affected as much as others, although the restaurant’s sales were down by 40 percent the Saturday before the directives.

“I don’t know how long this is going to go on,” Kelly said. “I go to – at least, I used to go to – this Chinese restaurant, and they don’t have a drive-thru. Most people go to a restaurant because they want to sit down and eat. I think it’s going to cause some people to go bankrupt, I guess. This is not a short-term thing. This is not going to go away. If it’s already this bad now, what’s it going to be like in two or three months?”

Two local business owners believe the new directives to limit large gatherings and close some restaurants and bars could lead to a new normal in automation.

“What’s the problem? People,” said Ron Hopwood, co-owner of Hopwood Cellars Winery. He added that the potential transfer of the new coronavirus from one person to another is what drives the need for businesses to temporarily close some or all of their operations.

Hopwood was contemplating the idea of automating some aspects of his business before the closures were announced March 16, and he said those ideas will be even more pertinent in the coming weeks.

“It might almost be a positive in that it’s pushing us to the next level,” said Steve Cousins, owner of the Papa Murphy’s in Zionsville and Nature’s Choice Landscape, Garden Center and Landscaping and Garden Center in Brownsburg. “I think economies kind of figure themselves out, like when we automated back in the ‘50s. People are displaced, but they had to become something else and build new skills.”