You are at:Home»Current in Carmel»Carmel Community»Greyhounds reflect on pandemic ending chance to defend basketball title

The Carmel High School boys basketball team was poised to make a run at defending its 2019 Class 4A state championship.

But it wasn’t to be as the coronavirus pandemic forced the postponement and then cancellation of the rest of the state tournament. The Greyhounds (18-7) had won six games in a row and were set to play New Haven March 14 in the Logansport Regional semifinals. 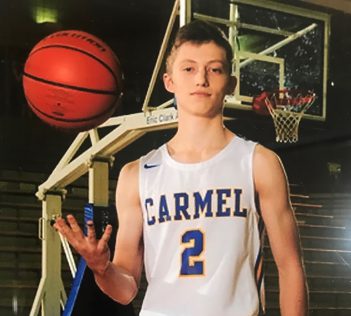 The team went to practice at Logansport March 12 and learned the games would be played in front of families only. The following day, the Indiana High School Athletic Association announced it would postpone the tournament.

“At the time, you don’t know the severity of what is going on,” Osborn said. “As you look at it now, it’s obvious that we shouldn’t be playing.”

With schools closed until at least May 1, the IHSAA had to cancel the tournament. Osborn said IHSAA Commissioner Bobby Cox and his staff did everything possible to try to play the rest of the tournament.

“They’ve finished a tournament every year since 1911. There has been a lot of stuff going on since then and they found a way to play it,” he said. “It kind of tells you the times you’re in.”

Osborn said his team was definitely peaking at the right time.

“I felt Brian Waddell had gotten healthy and more confident and started playing well for us,” Osborn said. “The guys in the regular rotation were doing a lot of good things and matured throughout the season. I look back to early December when we got beat by Lawrence Central pretty good and there was a lot of growth between that game and winning the sectional championship. I was super proud of them. That was our ultimate thing, (to) play your best in March and give yourself a chance. I thought this team did that.”

Jackson Jannsen said the Greyhounds were meshing better as the season went on.

“It kind of sucks,” said Jannsen, a 6-foot-1 guard who will play for Manchester University next season. “We were really looking forward to it, especially me being the only senior, to get that chance to win regionals and then get the chance to go to the state championship back-to-back years (by winning the semistate). It’s something we really missed out on. It would have been a great experience for everyone.”