You are at:Home»Current in Carmel»Carmel Community»Pollard’s videos hit home for many

Editor’s note: Scot Pollard, 45, is a Carmel resident, Realtor with Kempler/Pollard and Encore Sotheby’s in the Village of WestClay and former NBA 11-year veteran with the Indiana Pacers and other teams. After noticing a Twitter post in which he volunteered to send a video greeting to anyone celebrating a birthday or otherwise in need of a pick-me-up, Current Publishing caught up with Pollard as he and his wife, Dawn, and their three at-home children were self-quarantining as a result of the COVID-19 pandemic. What follows is a quick discussion about his goodwill-video gestures. 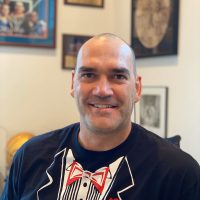 Current:  What inspired you to do the video initiative?

Pollard: Someone requested a birthday video, and I know a lot of “celebrities” that are on a platform called Cameo, which allows them to profit by doing videos for people. For example, someone wants a video birthday message for their friend who is a huge “Survivor” fan (Pollard was a contestant on the show in 2016), they pay whatever it costs to get their favorite “Survivor” character to do the video and it gets sent to them. I decided to do the same thing – but personally and for free. People have enough to worry about right now; no need to try to make a buck off panic. For me, though, I am more concerned about the people who are truly struggling with isolation. Whether it be from lack of family, funds or anxiety, this can be very difficult for some people. That was the impetus behind my idea.

Current: What’s your method to answering the numerous requests, and how many have you done?

Pollard: My method has been direct. I get the request, I film a video and direct-message it to their social media inbox. I’m on Twitter, Instagram and Facebook, but I have only done this on Twitter and Instagram. I haven’t counted how many, but it’s been a lot more than I expected. I never should have underestimated the need for levity in times of stress!

Current: What types of requests have come in, and how long do you foresee being able to do this?

Pollard: Mostly it has been birthday wishes or fans of one of the teams I have played for, whether it’s Kansas, Detroit, Sacramento, Indiana, Cleveland or Boston, there have been requests from all of those fan bases. I’m willing and able to do this as long as my schedule allows. Like everyone else, my schedule has freed up considerably with the cancellation of a lot of events my wife had booked for me and us, as well as herself in the upcoming months.

Current: We’ve seen some of the responses to your offer, but what has the feedback, overall, been like, and how does that make you feel?

Pollard: I haven’t had a single negative feedback thus far, which is odd, given social-media users’ ability to be anonymous and libelous. That, in itself, makes me feel good, that maybe we can all be better and uplift without the garbage anonymous negativity that some people engage in. As far as the positive feedback, there has been one that has stood out so far. It was from someone who flat out said, “I’m one of those people” (that may just need reassurance). Seems pretty obvious they were in need of someone to acknowledge and appreciate them. That one feels good, and I hope that person hangs on.

Current: In addition to the “pick-me-up” videos, what’s your recipe for making the most of each day at home with your family?

Pollard: We, like most everyone, I’m sure, have spent too much time on (computer, phone and tablet) screens. However, we have bundled up for some walks, we have made a family video and plan on doing more of those. Just the production of them has created memories. The kids have cleaned out their rooms and prepared toys and clothing for donation, so we are continuing to keep the focus on other people that are having hard times. Idle hands and minds are dangerous, so the focus is to stay busy at all costs!