You are at:Home»Current in Zionsville»Zionsville Cover Stories»Boys & Girls Club gives back: How an afterschool program is aiding families in need

Shortly after the World Health Organization declared the new coronavirus a pandemic and schools began temporarily closing, staff at the Boys & Girls Club of Boone County became concerned about local families and their access to food.

During the school year, each county school system typically provides families who need meal assistance with access to free or reduced lunches for their children, and after school, the Boys & Girls Club would give children a chance to receive another meal. The club estimates it gives out 100 meals per day at its locations during a normal school day.

But the statewide closure of schools until at least May 1 started a ripple effect that forced the Indiana Dept. of Education funding for the club’s meals to temporarily cease. But many school systems, including Zionsville Community Schools, have pivoted to offer free meals at their schools during closures.

Mark Branch, CEO of the Boys & Girls Club of Boone County, said he and his staff knew families would need more help as a result, so the club met the challenge of the new coronavirus and its fallout by providing families in need with free hot meals every weekday.

“There’s definitely a gap, particularly for our kids,” Branch said. “But we did decide it wouldn’t just be our kids. It would be for the community.”

Almost immediately, the club’s efforts were seeded by a $5,000 Community Foundation of Boone County emergency grant. Branch said the grant, in addition to sizable donations, gave the club confidence to pursue its efforts.

Thanks to donations, the club has offered hot meals that include a variety of foods from 4 to 6 p.m. at the back of its Lebanon location, 403 W. Main St., with the facility’s rear entrance acting as a makeshift drive-thru. The meals contain a cooked meat-based entree, fruit and vegetables and other assorted foods. Meals vary each day based on donations and quantities.

Donations have poured in recent days, Branch said. The club has received mass quantities of food in addition to monetary support. Restaurants, churches and companies also have contributed by offering to cook meals.

In the first week, the club provided 754 hot meals, averaging 180 a day. Branch expects the number to increase in the coming days to more than 200 per day.

“It’s been extremely rewarding to help people,” Branch said. “We’ve been blessed to have a ton of volunteers, particularly from the Zionsville community, but (also) from all over.”

Volunteers work in two shifts during weeknights, with 10 total working to serve Boone County families. The first group of five volunteers arrives at 3:30 p.m. and begins to prepare and package the food so that it is ready for when cars drive up at 4 p.m. At 4:30 p.m., a second group arrives and finishes out the night, until the club closes at 6 p.m.

The two groups are separated and spread out to adhere to social distancing measures recommended by health agencies to combat COVID-19, the disease stemming from the new coronavirus. They prepare and package the food. Boys & Girls Club staff then carries the food out to cars in the drive-thru. Families are generally limited to eight meals, but there may be exceptions, Branch said.

“We’ve raised almost $20,000 in donations through grants and individuals,” Reasoner said. “Our mission is to be there for people who need us most, and this is what our mission is all about.”

For more or to donate, visit bcgboone.org. 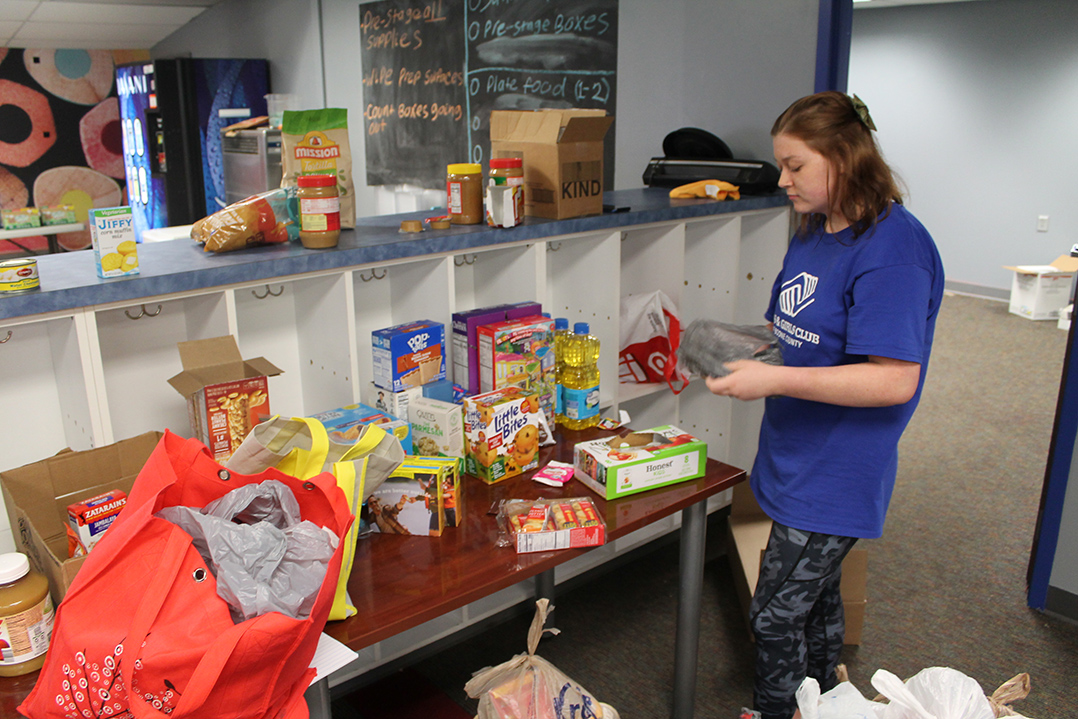 The Boys & Girls Club of Boone County has provided county residents with hot meals in the last few weeks, thanks to the help of volunteers.

One Zionsville family has volunteered to help with the club’s efforts. Laura Gibson said her children went to the Boys & Girls Club when they were younger.

Now, in addition to having a reason to go outside, the family finds joy in joining others in the effort to feed Boone County families.

“It’s nice just to give back to an organization that has done so much for us,” Gibson said.