You are at:Home»Current in Geist»Geist Community»Patterson returns to LC as football coach 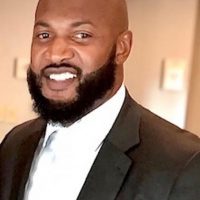 Patterson, a 2006 Lawrence North graduate and former Indiana University player, coached at Lawrence Central from 2013 to 2018. He was junior varsity head coach and varsity linebackers coach his first three seasons and was then varsity co-defensive coordinator his final two seasons. He also was the boys track and field head coach.

“What I’m most looking forward to is rebuilding that family atmosphere that I’m used to and truly making football a vehicle for these young men to use to propel themselves for the rest of their lives like I did,” Patterson said.

The previous two coaches, John Rodenberg and Bill Peebles, served two seasons each before stepping down. Peebles left to become the Cathedral coach and Rosenberg accepted the Roncalli coaching job.

“I think LC is probably one of the best places to coach football in the state of Indiana,” Patterson said. “The turnover has been pretty unfortunate. I believe the best talent overall comes from the east side of Indianapolis. It’s been that way for years, probably even before I was in high school. This is a big job; this is not a stepping stone. I don’t know if the other guys used it for that.”

Patterson said the Bears have had solid roster numbers and he expects the figures to grow.

“With the turnover (of coaches), I think a lot of parents are tired of the inconsistencies, so I think that will change knowing I’m coming in and committed to staying there,” Patterson said. “With the demographics in our area, I think our parents will migrate to having a minority head coach and see that as a big benefit for their sons. I’ve been told we have a pretty strong freshman and sophomore class. I’m eager to work with those kids.”

Patterson was a linebacker at IU, finishing his career with 267 tackles (173 solos) in 38 career starts.

Patterson, who spent some practice time with the Houston Texans in 2010 before being cut, played with the Iowa Barnstormers in the Arena Football League in 2012.

“I think my ability to mentor these young men on the level that everyone is chasing is a benefit to myself,” he said. “As a kid, you get into the game with the desire (that) if I’m in high school I want to play in college, and if I’m in college I want to play in the NFL, and being fortunate enough to play at all those levels, I think the mentorship piece from that standpoint is going to help us to market the program.”