Noblesville Schools has been long overdue for a new stadium.

Built in 1969, Beaver Materials Field is frequently at or near capacity, especially for varsity football games. A needs assessment conducted three years ago identified the stadium as in need of more space, among other projects that needed to be addressed throughout the district.

“The last two years we were doing things like roofs and HVAC and fixed the structures of our buildings. We spent two years doing that, and that’s what led us to where we’re at now doing some of the larger items,” Associate Supt. Dave Mundy said. “We’ve been working behind the scenes doing a lot of fixing, and now two focuses are coming out of the project.

“Capacity for all programs and a place for everybody is what we are trying to work on.”

“We don’t want people to stop coming. We want our long-term supporters to have their seats, and we want our students to keep coming,” Mundy said. “Last year at homecoming, we were one step away from turning people away because of how big our crowd was and we don’t want that to happen. Also, our track program has done well, and we want to give them the best facilities we can.

“We are really trying to find an area and home for everybody.”

The plan is to construct a $14 million stadium behind Noblesville High School to be home to the band, track and football programs. Beaver Materials Field hosts football games and track events, and if a new stadium is constructed, it will be home to the lacrosse and rugby programs.

However, other non-sports programs will benefit from a new stadium as well.

“We have changed to a higher level of band performances, and that adds to more need for space for practices,” Mundy said. “We would love to host some large band competitions and use both fields.”

The new stadium should be open for the spring 2021 track season. The project is financed through a bond and is not using referendum dollars. School officials also said it will not affect the tax rate.

“Our tax rate went down last year even with construction,” Mundy said.
The stadium will go to bid in April, and then final approval will be granted by the school board to start building.

In the meantime, some construction may begin on the new community center, to be built on Field Drive where the previous central office was. The facility will provide  space for alternative education for students ages 18 to 22 with special needs as well as host adult evening classes for non-English students to learn English. It also will have an indoor practice space and an area where the community can rent a larger room with a kitchen for meetings.

The $6 million project should be complete by January 2021. For more, visit noblesvilleschools.org. 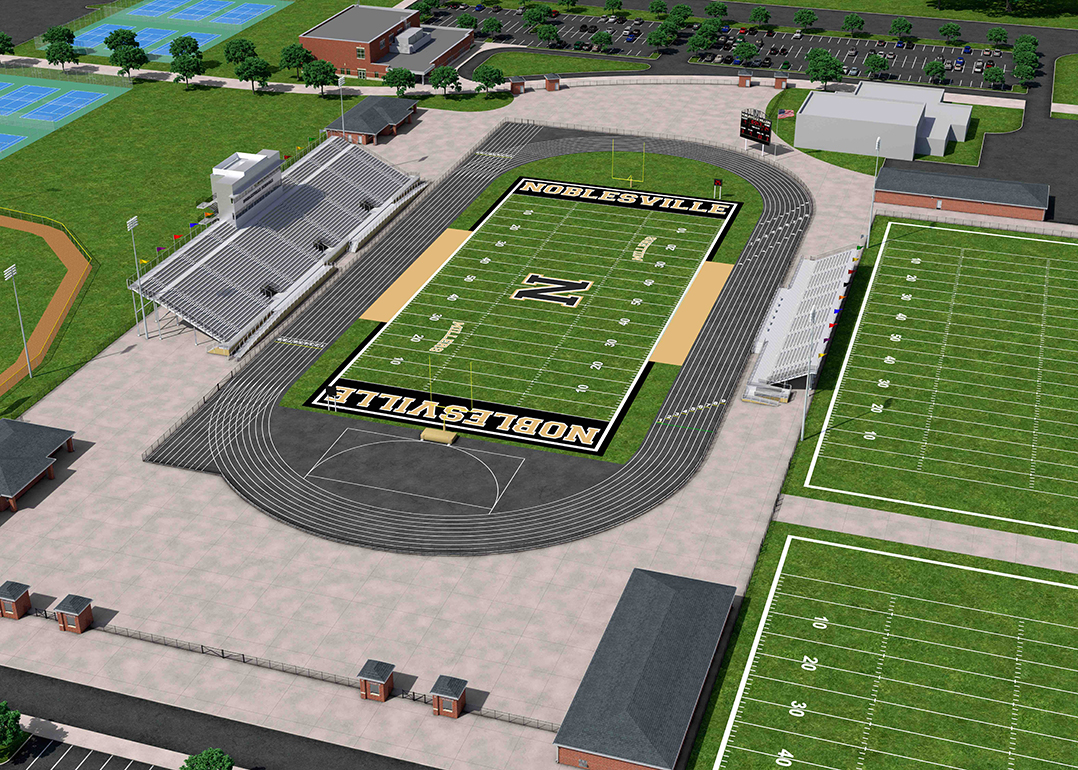 A rendering of the new stadium, which should be complete by 2021. (Submitted image)