You are at:Home»Lifestyle»Chaplain stays connected with Hoosier village residents

Hoosier Village Chaplain Ron May has been committed to sharing the stories of World War II for several years.

The 56-year-old Carmel resident has been chaplain of the Zionsville senior living community since March 2015. 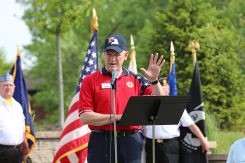 May. (Photo by Ann Marie Shambaugh)

May, who had been a Navy Reserve chaplain for 22 years, is working on his third book on veterans. He has been writing veterans and World War II features for the Martinsville Reporter-Times since 2012.

Along with interviews, May is basing his books on journals and letters of deceased World War II veterans.

He developed an interest in acting in recent years. It started when he performed a one-man drama as former World War II news correspondent Ernie Pyle in January 2018. He performed it several times afterward.

“I began contemplating getting involved in community theater,” he said. “Acting in community theater productions has been a fun new hobby and outlet for me. I enjoy working with and getting to know the other cast members as well as being part of something that gives back to the community.”

In July 19, May appeared in Carmel Community Players’ “Failure to Zig Zag,” a play based on the court martial trial of Captain Charles McVay III after the sinking of the USS Indianapolis. He had been preparing for a role in another military play, “A Few Good Men,” a Civic Theatre production which was scheduled to open March 13 at The Studio Theater at the Center for the Performing Arts in Carmel, but was postponed because of the COVID-19 pandemic.

“We were only able to do the dress rehearsal,” May said. “We were expecting it to be postponed but we were hoping to get the opening night in.”

The production was postponed approximately three hours before opening because of crowd-gathering restrictions. Civic officials will attempt to reschedule the show as part of the 2020-21 season.

“I am hoping in the near future to expand beyond the military genre — obviously, there aren’t as many military plays to audition for — and experience some other roles in non-military (theme) productions,” May said. “The staff and residents of Hoosier Village have been very supportive of me. They were my first audience for my Ernie Pyle one-man drama. For my play (“Failure to Zigzag”) last summer, residents filled two buses and took up half the seats for one of the performances.”

“It is the first of its kind,” he said. “The program is a collaboration between Arizona State University and the National World War II Museum in New Orleans, with both institutions providing instructors. I am just over halfway through the 30-credit hour program. I will graduate in December.”

During the pandemic, May has had to turn to technology to keep in touch.

“I have had to transition from conducting group services and Bible studies to video-based worship services and Bible studies,” May said. “We broadcast the videos on our local cable access channel at Hoosier Village. I also have created an educational video seminar on the history of the Christian church which will begin airing this week on the cable channel. I plan to create/broadcast a 10-day seminar (45-minute program each day) on the ‘War in Europe’ to commemorate the 75th anniversary of the end of World War II on May 8. The rest of my time is filled by personal visits and phone calls to residents.

“It certainly has been a different time for ministry. I am grateful that technology has allowed me to continue offering services, Bible studies and seminars in video formats.”