You are at:Home»Current in Zionsville»Zionsville Community»ZCHS graduate Dunlop ready for shot with Chargers

It didn’t happen, but 25 minutes after the draft concluded, his Dallas-based agent, Robert Sheets, called with news from the Los Angeles Chargers. 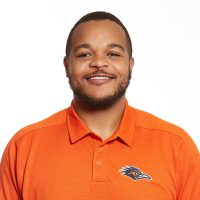 “The first thing he said was, ‘Congratulations, you are going to Los Angeles,’” said Dunlop, who played offensive guard and tackle for The University of Texas at San Antonio. “I asked him to say it again because it didn’t register. I was so excited, I ran downstairs to tell my mom (Karlin Dunlop). We watched the entire draft, but we knew there was a strong possibility of free agency.”

The 2015 ZCHS graduate redshirted and then played one year at Dodge City (Kan.) Community College. The 6-foot-6, 315-pound lineman played three seasons at Texas-San Antonio in Conference USA, starting 31 of 35 games. He played both tackle spots and right guard.

“The Chargers said just be ready, it could be guard or tackle,” Dunlop said. “In my mind, take some reps at tackle, take some reps at guard and keep your technique as high as you can be because the more versatile you are, the better chance you have of making the roster.”

With the coronavirus pandemic, camp dates haven’t been determined. Normally, teams hold mini-camps or organized team activities in May or June.

“I just got my (Microsoft) Surface laptop with the playbook on it so I’ve been studying that,” said Dunlop, adding Zoom meetings were scheduled to begin May 8. “I’m just trying to keep the cardio up and working on technique specific. I’m trying to stay active and not sit around the house like a slug all day.”

Dunlop skipped playing during eighth grade, but played football prior to that. At the time, Dunlop said he favored basketball.

“After a few talks with my coaches back there, they said there was probably a better chance for me in football,” he said. “I made the decision to let basketball go and stick with football primarily.”