You are at:Home»Current in Carmel»Carmel Community»Assistant AD nears end of long tenure at Carmel High School

This is obviously not how Bruce Wolf expected to spend his final days as Carmel High School’s assistant athletic director.

With the coronavirus pandemic closing the school since March 16, there have been no spring sports events for Wolf to attend. 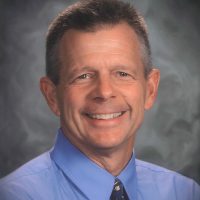 “It’s really disappointing, but it’s during the times like this that people’s tenacity, perseverance and character is tested,” Wolf said. “All the kids I’ve talked to are handling it well. They’re disappointed, but I’m really proud of them because they are demonstrating their determination they are going to move on. That’s the positive side of this, if there is one.”

Wolf, 63, is retiring this summer after working 40 years at CHS. The 1975 CHS graduate started as a science teacher in the fall of 1980 after graduating from Purdue Unvirsity. He later taught computer programming before returning to be a science teacher.

Wolf, a Carmel resident, became assistant athletic director and head baseball coach for the 1994-95 school year. He gave up coaching baseball after two seasons because of the demands in the athletic department.

“After two years, I didn’t feel I was giving both jobs my best,” he said.

Prior to the 1994-95 school year, Wolf had been an assistant coach in football and baseball. He started those roles in 1980.

“One of the things that has never changed since 1972 when I got here as a sophomore is it’s a great place to be whether you are a student, a teacher, administrator or coach,” said Wolf, who attended Indianapolis Arlington High School as a freshman before his family moved to Carmel. “The biggest reason for that, in my opinion, is the kids expect the best out of you every day. While that is challenging, it’s also empowering, engaging and motivating. Not only do the kids want your best, they show their appreciation.

“I’m sure there are other places around like that. But because it’s been that way for 40 years or more, I never felt the urge to go somewhere else.”

“He is truly beloved by the Greyhound community and athletic directors across the state,” Inskeep said. “His leadership and love for our kids in all their endeavors is what we will miss next school year. He has made a difference in so many areas, including our Champions Together initiative.”

Champions Together is a partnership between the Indiana High School Athletic Association and Special Olympics. Wolf said it has been rewarding to see students with intellectual disabilities have the opportunity to compete in track and field and flag football.

“It’s been rewarding to watch girls sports evolve with increased opportunities, not just at Carmel but the state of Indiana as well,” he said.

Wolf’s wife, Jackie, is retiring as a counselor at Fishers Junior High School. Their children both graduated from CHS, Jake in 2010 and Emily in 2014.

“I plan on sticking around the area for the foreseeable future and keeping my eye on the Greyhounds and see how they move forward,” Wolf said.