Producer Haley Lawrence had to adjust her “Listen To Your Mother” from a series of live readings to a virtual production because of the coronavirus pandemic.

“Listen To Your Mother” had two sold-out shows at Indy Fringe Theatre in Indianapolis in May 2019. It was scheduled May 9 at the University of Indianapolis, the day before Mother’s Day, before it had to shift gears to a virtual production. 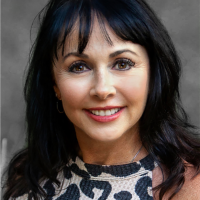 Lawrence, a Carmel resident who owns The Fearless Leap, chose 11 central Indiana storytellers to inspire audiences with their personal tales. Lawrence chose the 11 from dozens of auditions.

Singer Allison Victoria and performance artist and poet Manon Voice were part of the production.

“The response has been fantastic,” said Lawrence, who said the show had sold 129 tickets as of mid-May.

The show is available to watch for the rest of May on thefearlessleap.simpletix.com. Tickets are $12 for the nonprofit show in support of Pass The Torch For Women Foundation. There are $5 raffle tickets available with 100 percent of sales going to Pass The Torch.

“He did a great job putting it together and a local director (Paul Nethercott) assisted me,” Lawrence said.

Author Ann Imig founded “Listen To Your Mother” in Wisconsin in 2010. Lawrence has the central Indiana rights to the show, which is held in 50-plus cities as a charitable event.

Many of the raffle items were donated by businesses.

Lawrence said she plans to do the program again in May 2021, but hopefully live.

“This was such an amazing amount of work, hours and hours to pull it off,” Lawrence said. “Doing it on stage is so easy compared to this. It was a definitely a labor of love.”