You are at:Home»Current in Westfield»Westfield Community»Colts defensive coordinator high on Rivers

Indianapolis Colts defensive coordinator Matt Eberflus said he can sum up his view of addition of quarterback Philip Rivers in one word: excitement. 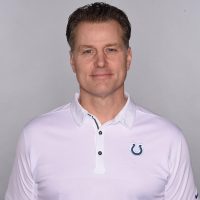 “I know from my perspective going against him a few times in my decade in the NFL, he was a handful,” Eberflus said. “He’s got tremendous courage in the pocket and he has great vision. He’s extremely accurate. You look at the downfield throws this guy makes, the amount of passing yards he has and the commands he has of the offense as far as audibles, the high intelligence he has, I’ve observed that from the other side of the ball.”

Eberflus, a Westfield resident, shared some thoughts on the Colts’ upcoming season with the Westfield Rotary May 26 through a Zoom conference.

Eberflus said he hopes the team’s training camp will be held at Westfield’s Grand Park, rather than the Colts headquarters on the west side of Indianapolis. The team has not met on the field because of the coronavirus pandemic.

“The facility and atmosphere of training camp is so good there,” he said. “That might be predicated on whether fans are able to come or not. If fans are allowed, I think 105 percent we’ll be up here. If fans are not allowed, they’ll look at the logistics of it, whether it’s smart for us to move everything up there if there are no fans.”

Although the team is monitoring workouts and holding meetings online, Eberflus stressed there is no substitute for on-the-field practice.

“Having training camp two weeks before the first preseason game is so important, and if that doesn’t happen, the product will suffer on the field,” he said.

The Colts rookies are tentatively scheduled to report July 20, with veterans coming in July 28.

“The outlook for the season is to adjust, adapt and overcome,” Eberflus said.

Eberflus said players and staff have to be more patient with the Zoom workouts and meetings because the interaction is different.

“You have to give everyone a chance to speak if they have something to say,” Eberflus said. “Overall, the meetings have been fabulous. The players make the meetings because they’ve been engaged and been involved.”

“If you have a good attitude, you want to learn and you have a humbleness about you, the way you can improve through the help of others,” he said. “I’ve been fortunate to be around a lot of really good people. (Alabama coach) Nick Saban was one of my coaches (at Toledo).”

Eberflus, a starting linebacker at Toledo, spent 18 years as a player and assistant coach under former Toledo and Missouri coach Gary Pinkel.

“He was a great mentor for me,” said Eberflus, who is entering his third season as the Colts defensive coordinator. “What I’ve learned through the years is to coach the person first and the player second.”

Eberflus offered his view on several things, including the toughest player to prepare to play: “(Kansas City quarterback) Patrick Mahomes because of his ability to throw the ball on time and on target and his ability to create when he doesn’t throw it on time.”