A Carmel company that provides technology for dentists has transformed its mission in an effort to keep its employees working while at the same time making a difference in the fight against the COVID-19 pandemic.

Medical TI, an initiative of Dental TI, has begun 3-D printing 6-inch nasopharyngeal swabs that can be used to test for COVID-19. With testing efforts on the rise, swab shortages have been reported in Indiana and throughout the nation. 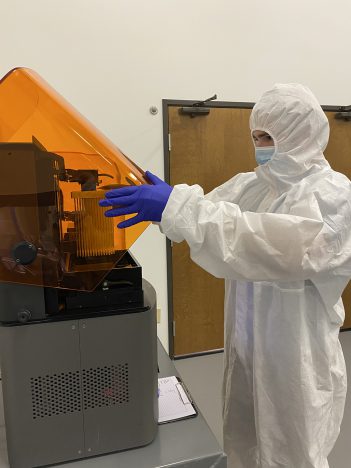 Swabs batches of 410 pieces are removed from the print bed upon completion before going through three isopropyl alcohol baths. (Submitted photo)

“It’s working out to allow us to keep doing what we do while doing something different at the same time to serve the community and help our customers,” said Medical TI CEO David Hanning, who founded Dental TI in 1999.

Normally, Medical TI sells and installs dental imaging systems. Hanning said business dropped approximately 75 percent during the peak of the pandemic. He said some business has started to pick back up again with many dental offices reopening, but many clients aren’t making big purchases during a time of uncertainty.

Medical TI, 1015 3rd Ave. SW, also sells 3-D printers used in dental offices, so Hanning figured the company already had much of the equipment and expertise it needed to print swabs. After learning the process through a virtual seminar, Medical TI employees began printing the swabs on May 8.

At $3.50 for sterilized swabs and $2.50 for unsterilized ones, the 3-D printed swabs are more expensive to produce than traditional swabs, which cost up to 50 cents each, Hanning said.

“We’re doing this to try to help,” Hanning said. “We want to stay in business, but I’m not looking to be a profiteer from this type of thing.”

Hanning, a Carmel resident, said he wants to donate some of the swabs to local long-term care facilities because state officials have advised all employees and residents at those facilities be tested for COVID-19.

It takes approximately 6 hours to produce a batch of 400 3-D-printed swabs. Once they come off the printer, they must go through three alcohol baths to remove residue before being put in a commercial oven to dry for 30 minutes. Next, the swabs are placed in an ultraviolet light enclosure to be cured. Finally, they are inspected and bagged.