So the Fishers musician and his son, Travis Frank, who now lives in Los Angeles, were thrilled to perform as an opening act when bands Stryper, Petra and Whitecross performed in Rocktoberfest Oct. 29, 2016 at Old National Centre in Indianapolis. 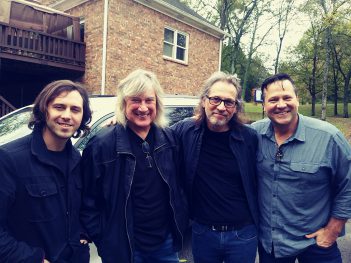 That led to more collaboration with some members of those bands, including Petra lead singer John Schlitt. Frank and his son formed a band, Holy Fire. The band released its first single, “Fool Runnin,” in April, which Frank wrote.

“I’m hoping to do a complete album, but it’s taken us a year to get the first song on,” Frank said. “Depending what happens in the next couple months will determine if we ever get a whole album out. For us to continue to record, we’re going to have to go back to Tennessee to finish the rest of the songs.”

Frank said the band intends to make a video, but those plans have been delayed by the coronavirus pandemic. Frank said some songs are already written but the band needs time in the studio.

“I’m taking things one at a time but it’s good to have something released,” Frank said. “I’m pleased with it and I’m ready to do another one.”

Frank said Holy Fire is ready to do a show, but all the members have their own solo projects.

Schlitt, 70, released a 10-song solo album called “Go” earlier this year. Prior to joining Petra, Schlitt was the lead singer for Head East, best known for the hit “Never Been Any Reason.”

“I want to help John get out and promote his new album,” Frank said. “Stryper is releasing a new album this year. I just love the Christian rock music and sharing with the groups out there hammering away, sharing the gospel and their message.”

Frank said he is looking for a venue where the band can perform a Holy Fire show with Stryper or Petra.

“A lot of these musicians are with different bands,” Frank said. “The Holy Fire aspect of it would be bringing Travis in and we would do an actual show with our stuff. It’s more of trying to get the message out through the Christian musicians. When we get these guys together, we want to have these tunes that we can get up on stage and do.”

Frank said he would like to hold regular shows at a venue, perhaps a church, with central Indiana Christian musicians.

“Maybe we would do workshops where musicians can share their craft,” Frank said. “During these crazy times, music is one of those things that can bring people together. We want people to get their message heard and out.”

“As a band, we want to tap into the testimonies of guys like John Schlitt and myself who are trying to share their message through music,” Frank said. “Our message is geared toward love God and love each other.”

“Fool Runnin” is available on iTunes, Pandora and Spotify. For more, visit kellyandtravisfrank.com.