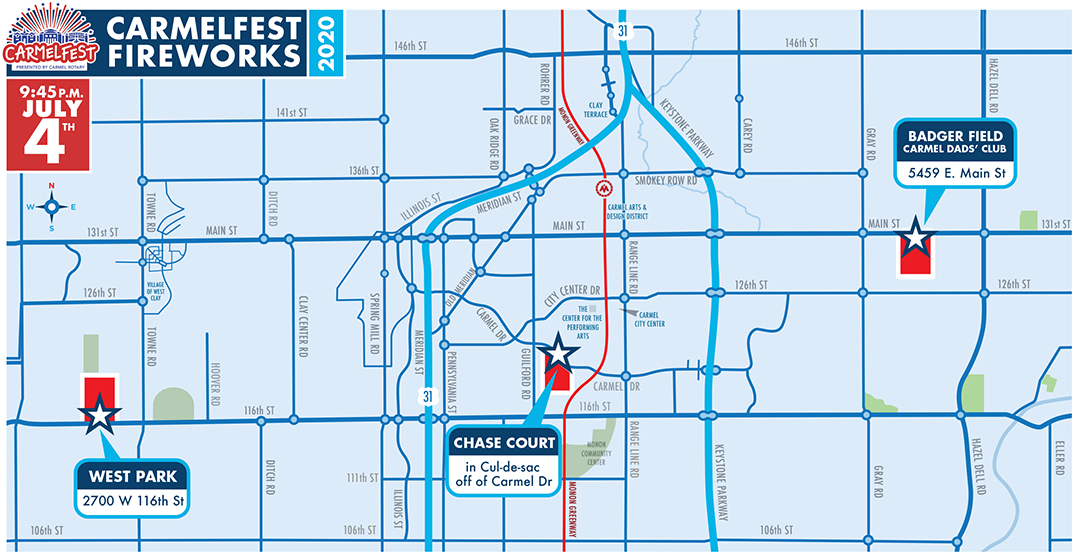 The sky will be three times brighter on Independence Day in Carmel this year.

The same fireworks show will simultaneously take place in three locations in the city to allow residents to enjoy the annual CarmelFest tradition from home.

“We didn’t want to cancel (the entire festival). We wanted to give our residents the opportunity to celebrate July 4. We wanted to be creative and unique and still be safe,” said Jeff Worrell, a Carmel City Council member and longtime CarmelFest volunteer. “By having CarmelFest in your own backyard, we think that’s a great compromise.”

The COVID-19 pandemic has caused the cancellation of the rest of the two-day event, which typically includes live music, a parade, kids areas, vendors and other activities. But the fireworks show, which typically caps off the festival, will begin at 9:45 p.m. July 4, like usual.

The show will be accompanied by synchronized music on WHJE 91.3 FM, but it must be played through an FM dial to avoid a delay.

The City of Carmel is paying $40,000 to Melrose Pyrotechnics for the three shows. Funds that would have been used for other city events that were canceled because of the pandemic will cover the cost.

Worrell said the 18-minute show will be approximately five minutes shorter than normal, but he expects it to be as impressive as the traditional display.

“As far as the intensity and beauty, I believe we’re going to give you a fantastic show that Carmel can be very proud of,” Worrell said.

The fireworks will be launched from West Park for the west side of the city, near Carmel Drive and Chase Court in central Carmel and Badger Fields on the east side. The sites will be closed to the public during the show.

Atomic clocks at each launch site will synchronize the shows so residents will see the exact same show at the exact same time, no matter which one they watch.

“I hope this gives us all something to look forward to,” Worrell said. “It is a great honor to be able to continue the longstanding tradition of celebrating CarmelFest in Carmel, Indiana. This year will maybe have a little asterisk next to it, but it wasn’t canceled.”