You are at:Home»Current in Carmel»Carmel Community»Tennis legend to help fundraise for Indianapolis Community Tennis Program

Nishesh Basavareddy credits his growing tennis success to his development the last several years in the Indianapolis Community Tennis Program.

Basavareddy, who will be a Carmel High School junior in August, works with personal coach Bryan Smith as part of the program. 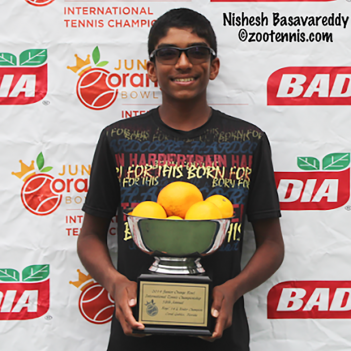 Nishesh Basavareddy won the Orange Bowl title for boys 14 and under in 2019. (Submitted photo)

“(The program) has been important to my development,” Basavareddy said. “It’s helped me grow and continue to improve as a tennis player and also work on my fitness and mentally. It’s helped in all aspects of my game.”

Basavareddy, 15, said he looks forward to taking part in the program’s virtual fireside chat with tennis legend Billie Jean King at 5 p.m. June 30. The event is a fundraiser for the program.

Basavareddy, who won the Orange Bowl title for boys 14-and-under singles in Coral Gables, Fla., in December 2019, is preparing for the United States Tennis Association’s National Championships on hardcourts in August. He played his first tournament at the Cracked Racquets Open June 12-14 at Tarkington Park in Indianapolis. Basavareddy, seeded 10th, reached the men’s open round of 16 before losing to No. 2 seed Millen Hurrion of the University of Kentucky. Prior to that, Basavareddy hadn’t played a tournament since early March. That was in the Dominican Republic.

Basavareddy has been working indoors with Smith at the Depot in Carmel for the past few weeks. The program’s outdoor courts at North Central High School are set to open July 4.

“I deeply appreciate Billie Jean’s support of Tennis for All,” Wynne said. “She supports Public Park Tennis Programs and has assisted our Indianapolis Community Tennis Program with her enthusiastic clinics and visits on three occasions. She did a four-hour clinic in 1970 when we opened 21 courts. Her enthusiasm motivated those attendees to be our first group of ranked players. One of those attendees was (Carmel’s) Todd Witsken.”

King will speak about her life, her connection to  Wynne and the Indianapolis tennis community, and her tips for staying engaged in tennis during the pandemic. She also will take viewers’ questions.

The chat with King is free but there is a suggested donation of $100 per family. To register, visit givebutter.com/BJK.