A new biomedical device is designed to prevent patients who have had an invasive discectomy procedure for herniated discs from suffering the injury again.

Dr. Paul Kraemer, a spine surgeon from Carmel’s Indiana Spine Group, conducted a discectomy and placed the Intrinsic Therapeutics’ Barricaid, a bone-anchored implant, for the first time in early June. 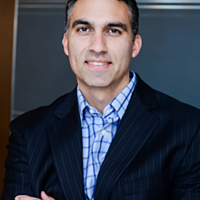 “Apparently, the one we did was the sixth in the United States and the first in Indiana,” Kraemer said. “It’s been done in Europe for several years, so it’s not something brand new out of someone’s garage. But it’s new for the United States. That’s a fairly common thing because the regulatory pathway is a little simpler in Europe. A lot of companies will go to Europe first and work out kinks there and then have an easier path to FDA approval.” 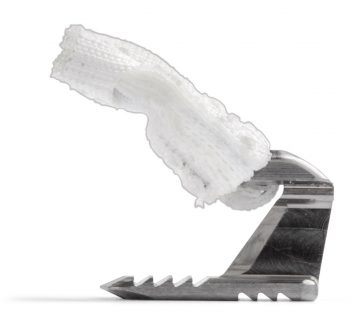 The Barricaid devive is designed to prevent herniated discs from recurring. (Submitted photo)

The device is proven to prevent reherniation by 50 percent and improve overall quality of life. The Barricaid closure device allows patients to rely less on pain medication and physical therapy. Kraemer said it is an outpatient procedure.

“Data from large insurance databases would suggest anywhere from six to 11 percent of people that have this operation will suffer some degree of reherniation, so Barricaid is designed to drive that six to 11 percent down to zero as close as possible,” Kraemer said.

Some studies show reherination at more than 20 percent.

Kraemer said it takes a couple extra steps to place the implant beyond a normal operation, but it might keep the patient from having a second operation.

“The most frustrating thing is reherniation, because generally, everything is going great, and three weeks out, you try to move something too heavy, you feel a pop in your back and you are right back where you started,” Kraemer said. “The Barricaid is designed to stop that from being able to happen.”