You are at:Home»Current in Carmel»Carmel Community»Carmel officials upset about new law diverting local income tax from Carmel to Fishers 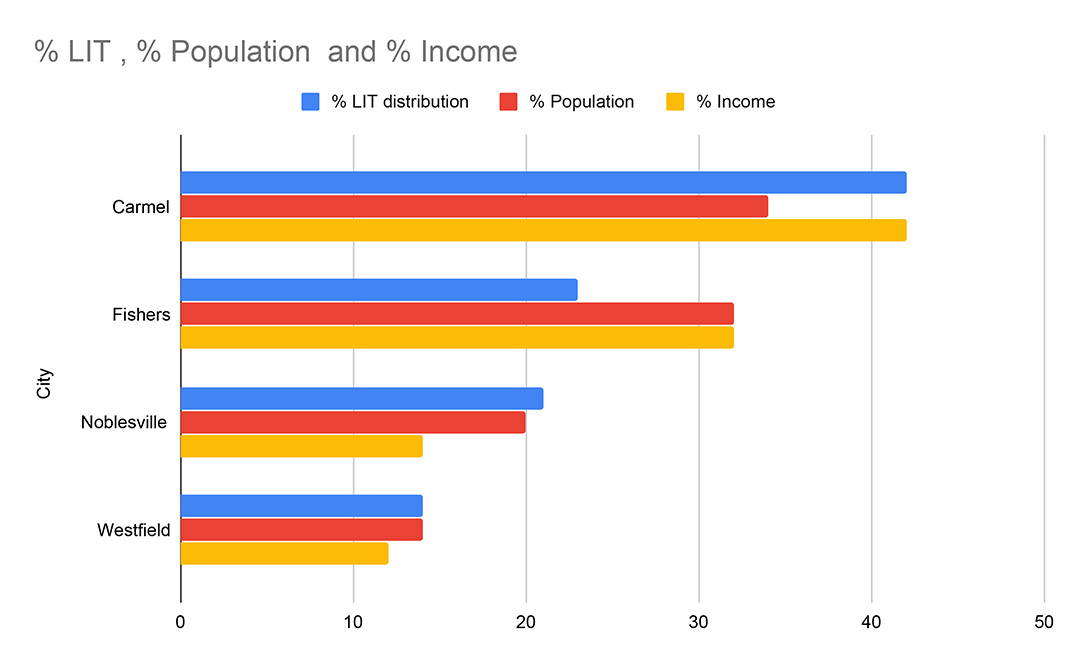 Source: Information from Curt Coonrod, financial consultant for the City of Carmel

As governments of all sizes prepare for the financial fallout from the COVID-19 pandemic, Carmel officials say they were already expecting their budget to take a hit from a change in state law that diverts income tax revenue from Carmel to Fishers.

Carmel typically plans for at least a 5 percent increase in income tax revenue, but HB 1113, along with various other changes to local government finance, limits Carmel to a 2.5 percent increase in annual income tax growth with anything above that amount going to Fishers for the next three years. Based on Carmel’s 2020 LIT allocation, each percent diverted from Carmel to Fishers equals $435,314.

And Carmel officials aren’t happy about it.

“It’s nothing more than a massive wealth redistribution plan,” city councilor Sue Finkam said during a May council meeting.

The state’s local income tax distribution formula was developed in the 1970s because the Indiana Dept. of Revenue did not — and still does not — have a way to track the city of residence for those paying income taxes. The state provides income taxes in a lump sum to each county, with counties distributing it to municipalities at a percentage equal to their percentage of tax levy within the county. The tax levy is the total amount of money a government is permitted to raise each year through property taxes.

Although not exact, the formula is believed to be close to equitable most of the time. But cities like Fishers that have experienced rapid population growth in recent years can start receiving a smaller percentage of the income tax distribution as its population growth outpaces tax levy growth. The state sets the maximum tax levy growth each year; for 2020 it was 3.5 percent.

Carmel officials believe the new formula is unfair, however, because they say Carmel residents generate more income and therefore pay more of the taxes.

“There seems to have been a myth that Carmel is receiving an unfair share of income tax and therefore Carmel somehow owes something to Fishers, but it all depends on how you look at it,” said Curt Coonrod, a financial consultant for the City of Carmel. “By this analysis it’s true that a reasonable person might think that the Fishers share is unfairly low, but the units that are subsidized so to speak isn’t Carmel but Noblesville and Westfield.”

Coonrod said he used per capita income data from the U.S. Census Bureau to calculate total city income. His data shows that Carmel makes 42 percent of the county’s total income, which is approximately the same percentage it receives in income tax distribution.

But legislators didn’t see it that way, Coonrod said.

“The formula is simply that Carmel’s distribution each year for the next three years is limited to a 2.5 percent increase, an arbitrary number,” he said. “We were expecting a 5 or 6 percent increase a year or more, so that is a cost to Carmel in the sense that it’s increases Carmel will not receive.”

State Rep. Jerry Torr, who represents Carmel and voted in favor of HB 1113, said the 2.5 percent cap is a much better deal for Carmel than what was originally proposed.

“In the 2019 session, there was legislation proposed that would have drastically reduced and almost eliminated the growth in Carmel’s income tax revenue over the next few years,” Torr said. “It really would’ve put a hurt on Carmel’s budget, and fortunately we were able to stave that off.”

Jeff Worrell, who was president of the Carmel City Council in 2019, said he met with representatives from other city councils in Hamilton County to try and negotiate a deal that would be less harmful to Carmel. He said the bill as proposed in 2019 would’ve resulted in a $45 million loss to Carmel, but after several meetings with Fishers officials they reached a compromise that is expected to send $18 million to Fishers instead of Carmel over five years.

“I think the whole thing was terrible, but the cards were in Fishers’ favor. Carmel did nothing wrong. We played by the rules,” Worrell said. “What we did was damage control to try and protect our citizens and residents as best we could.”

Fishers Deputy Mayor Elliott Hultgren said everyone negotiating the deal agreed that Fishers was the most negatively affected by the existing LIT distribution formula, but they differed in how to solve it.

“You can’t grow the pie, so you have to re-slice the pie,” he said.

After reaching an agreement not to change the formula in a way that would affect Noblesville or Westfield, Fishers and Carmel officials negotiated until they reached a compromise.

But with the COVID-19 pandemic leading to higher unemployment numbers and less income being generated overall, the new law may end up making as much of an impact as originally thought.

“What’s ironic is because of the pandemic there probably won’t be increases of 5 or 6 percent, so Fishers will not receive as much increase as they normally would,” Coonrod said.

The cap on Carmel income tax growth will sunset after three years. By that time, the Indiana Dept. of Revenue is expected to be using new technology that identifies the city of residence for each taxpayer. At that point income taxes will be distributed directly to the city where the taxpayer lives.

“That should return Carmel to essentially the situation Carmel has now,” Coonrod said. “What Carmel is paying inis approximately equal to what Carmel is receiving back.”

If that technology doesn’t exist by then — and the legislature doesn’t extend the cap on Carmel’s income tax growth — the county will automatically revert to the previous method of distributing income tax.

Curt Coonrod, a financial consultant for the City of Carmel, said it will be a while before cities feel the impact of less income taxes being generated. There is a two-year lag between when income tax is paid and when it is distributed to cities.

“It won’t be until 2022 that the pandemic will have an effect on income tax allocations,” Coonrod said. “At this point we really don’t have enough information to know what impact that would be.”

Municipalities are also expected to take a hit in supplemental distributions from the state, Coonrod said. Because of the two-year delay in distributing income tax, the state builds up a reserve of funds that belong to local governments, and at the end of each year the excess is distributed to them.

In recent years, Carmel has received approximately $500,000 per year this way. Coonrod expects the reserve fund to be empty by 2022 and for a year or two after that.

In the near term, the city also expects to receive less funds from hotel, excise and gasoline taxes.