You are at:Home»Current in Carmel»Carmel Community»Tree sculpture a homerun for Carmel couple

Jim and Anita Siccardi’s giant weeping willow tree had become a bit too much to handle.

The tree, approximately 40 feet tall, was shedding leaves and pollen into the pond at their Carmel home. 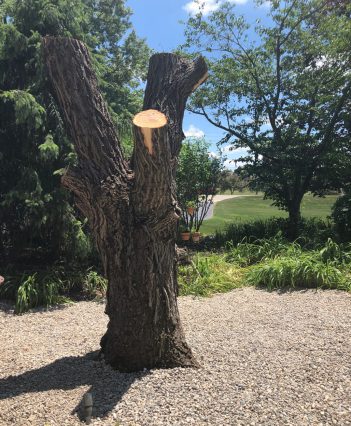 The tree before the sculpting began. (Submitted photo)

“It didn’t bother us when it was young and small, but as it grew, it became more problematic,” Jim Siccardi said. “We decided to cut it down. I told the landscapers to cut it down to about 10 feet and leave it so we could get a wood sculpture.”

Jim had learned of chainsaw artist Chris Trotter of Nashville, Ind., who did wood sculptures at Ironwood Golf Club in Fishers.

“He said he would enjoy it because he had never done a baseball player or an action figure, other than a golfer,” Jim said. “Originally, I thought bears, but everybody does bears. Then I thought baseball, and Babe Ruth is the best player in baseball, so I had to do Ruth.”

Of course, Jim is a bit biased as a lifelong New York Yankees fan.

Jim is originally from Plainfield, N.J. He met, Anita, in Indianapolis and they have lived in Carmel for 30 years. Siccardi, now retired, was in sales for library furniture and shelving. Anita is retired as the dean of the school of nursing at Marian University.

The wood sculpture took three days to create and was completed June 24.