You are at:Home»Current in Carmel»Carmel Community»Pro golfer eager to return to competition after being sidelined by ovarian cancer

Brittany Kelly was just completing her best year as a professional golfer when she got thrown way off course.

The 2019 Indiana PGA Women’s Player of the Year, who serves as an assistant pro at Woodland Country Club in Carmel, was diagnosed with ovarian cancer in December 2019. 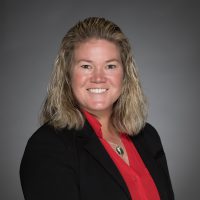 Kelly, a Fishers resident and 2007 Hamilton Southeastern High School graduate, was suffering fatigue, bloating, frequent urination and abdominal pain in November 2019. Those are the typical symptoms of ovarian cancer but she didn’t know it at the time.

“It was going on for a couple of weeks and I decided to go into the doctor because I thought I had kidney stones or something,” she said. “I wasn’t too familiar with the pain I was experiencing.”

After an ultrasound and MRI, the former Ball State golfer learned she had a mass on her ovary. She was eventually diagnosed with Stage 1 clear cell ovarian cancer.

“It’s an aggressive form of cancer, so I underwent chemotherapy,” she said. “The symptoms are so subtle not a lot of people know about them and they try to brush them off or work through the pain. It’s something I had never experienced before. I was lucky to catch it early.”

“I’ve been able to play a few rounds of golf with my parents (Ken and Joni Kelly),” said Kelly, whose father is a retired Carmel High School boys and girls golf coach. “With COVID-19, it’s hard to practice with a bunch of people around. I’ve been social distancing and playing a few casual rounds, which has been nice.”

“My strength is getting back and I’m getting healthier every day,” Kelly said.

“I wouldn’t wish this on anyone, but it’s been good for my personal growth,” she said. “I’ve had plenty of time to evaluate my life and my goals in life. It makes you reevaluate everything and how do you do better and help the next person. My goal is spreading awareness for this awful, awful disease. The best I can do is let people know the subtle symptoms.”