You are at:Home»Current in Zionsville»Zionsville Cover Stories»Open with care: ZCS plans to hold in-person classes in the fall

Zionsville Community Schools Supt. Scott Robison announced students will return for in-person classes Aug. 4, the original start date for the academic year. He also said plans are subject to change because of the COVID-19 pandemic.

Online classes will be offered for parents who do not want their children to return for in-person classes. Virtual schooling will follow the same curriculum, ensuring students advance at the same schedule as their peers, although lesson plans will differ between online and in-person classes. 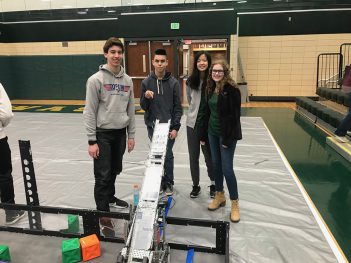 From left, Alec Pannunzio, Hayden Corbin, Jiayi Zhou and Amanda Pfeiffer of Team 7701R of the Zionsville Robotics Club, pause in front of their robot last semester. The club had eight teams place in the Vex Robotics State Finals at Lucas Oil Stadium. Teams qualified by winning tournament championships, judged awards or by having one of the top individual skills scores in the state during the regular season. (Submitted photos)

ZCS conducted a survey of parents and staff for input on reopening schools. The survey was sent to more than 9,000 families. Robison said more than 5,000 families and 900 employees responded. At that time of distribution, of the parents who responded, nearly 6 percent said they would not have their child return for in-person classes in the fall, Robison said.

Full results of the study was scheduled to be presented to the school system’s board of directors July 6. The district’s central office was set to open the same date to prepare for the school year. Detailed information regarding the school system’s plans to ensure the health and safety of students and employees, called the “Eagles Start Guide,” will be released to the public July 10.

“Given that each three of us is a massively different size than the other, some things will be different,” Robison said. “We just have different needs and capabilities. But in the main, I’ve heard from my other colleagues that they also plan to open in person and that they will also do their best with an online opportunity for folks who need that.”

The decision to recommend face masks also is meant to allow some children who can’t wear face masks because of health reason to still have access to in-person teaching, Robison said. Some may be asked to wear facial coverings only during certain times, such as in halls between classes. Ultimately, he said the school system will approach questions on mask wearing on a case-by-case basis.

Joining Robison, Zionsville Mayor Emily Styron said during a livestream Q&A that she failed to see wearing masks as a political matter. She said there is a consensus among health officials and researchers that they are effective, leaving little room to debate the issue. The Centers for Disease Control and Prevention now recommends residents wear facial coverings, especially indoors, in addition to frequent hand-washing and social distancing to reduce the spread of COVID-19. In the early stages of the virus’ spread in the U.S., the CDC stopped short of recommending face masks.

“From a parent perspective, I appreciate all the work you guys have been doing. I feel fully confident sending my kids back,” Zionsville Town Council President Josh Garrett told Robison during one of the town’s recent YouTube livestream Q&As. 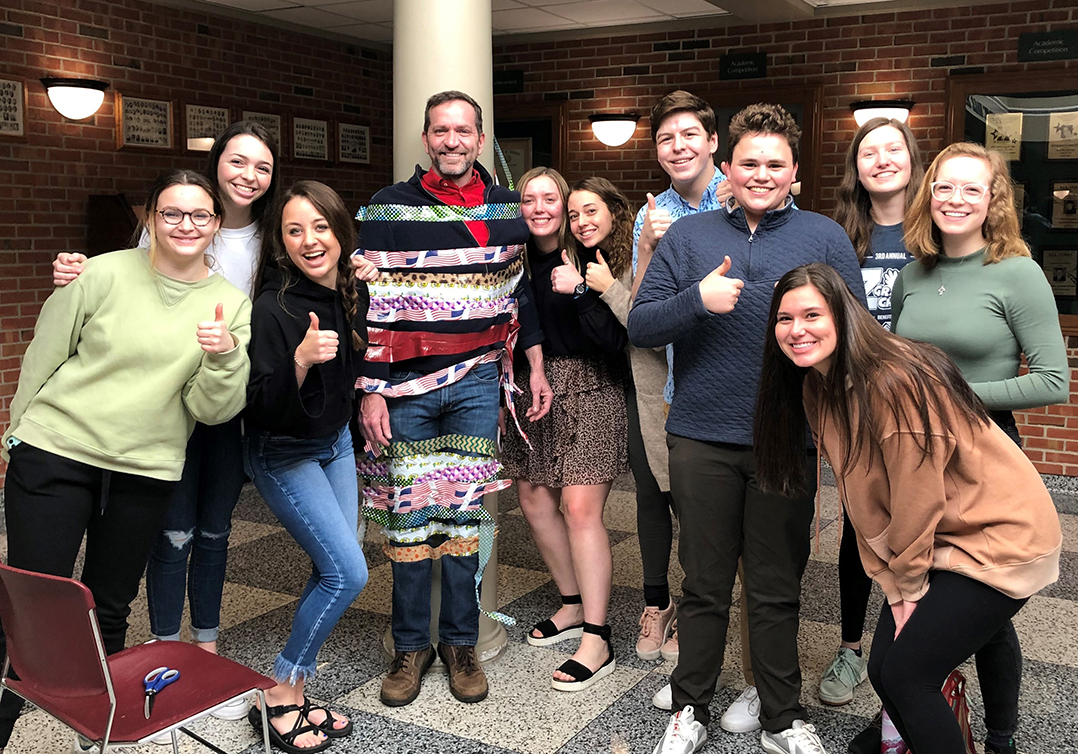 ZCS Teacher Bill Malle is duct taped by students who paid to put him there when school was in session to raise money for the Leukemia & Lymphoma Society in their Pennies for Patients campaign.

“A school building wasn’t really built to have humans be 6 feet apart for much of the day,” ZCS Supt. Scott Robison said. “And certainly, with districts that are growing, like ours, it’s difficult to have that much classroom space.”

To accommodate for tight classrooms that may not allow for ideal social distancing, Robison said other strategies, such as mask-wearing, and other separations and outdoor activities are being considered.

Robison also warned the school system may encounter scenarios that require schools to intermittently close, a possibility he said school and county health officials are brainstorming.

“We will employ them to our best ability across the school day to keep people safe,” Robison said. “This is hard, and I think good organizations make hard decisions. That’s still where we are at this juncture. It could ebb and flow some with the spikes we’ve seen in Florida, Texas and other places. We could still get more information between now and August 4 that could change our plans, but that’s the footing we’re in. That’s what it is right now.”