As the death of George Floyd at the hands of the Minneapolis Police Dept. has led to worldwide calls for law enforcement reform, Carmel Police Dept. Chief Jim Barlow is thankful nothing like that incident has happened here. And he aims to keep it that way.

But he also knows that his department has made headlines in recent years for the wrong reasons, such as a 2019 local TV news story that reported CPD tickets Black drivers at a rate nearly 18 times higher than white drivers. That was followed by a petition launched in June that claims racial profiling and discrimination by CPD is “both long-standing and disturbing.” The petition has been signed by nearly 3,500 people.

Barlow said he found the TV news story “insulting.” Although he strongly disagrees with its methodology and conclusion, he knows CPD has work to do to build trust with many members of the community — during a time police departments are already facing increased scrutiny.

“The perception is as damaging as the reality,” Barlow said. “We don’t want to have that perception. We want everyone to come here and feel comfortable.”

A few weeks after the TV news story aired, CPD refuted the station’s methodology. Data released by CPD stated that the Black population is as high as 11 percent in Carmel during daytime working hours  — not the 2.5 percent total population as reported in the story — and that Black drivers receive 20 percent of traffic tickets, not more than 33 percent, as reported. But city officials believe more information was needed to get an accurate picture and determine if there is truly a problem.

CPD has hired North Carolina-based Dolan Consulting Group to complete a yearlong study on the demographics of people driving in Carmel, which includes residents, workers and those just passing through the city. Dolan looks at traffic accident data — a type of incident not initiated by police — to determine the makeup of people driving on Carmel streets. It will break down the data for certain areas of the city and certain times of day.

The $45,000 study began July 1 after being delayed from its original start date in March because of the COVID-19 pandemic’s change to normal traffic patterns. CPD expects to have a report from Dolan by the end of 2021, and Barlow expects the results will show what he’s suspected all along: CPD does not discriminate. 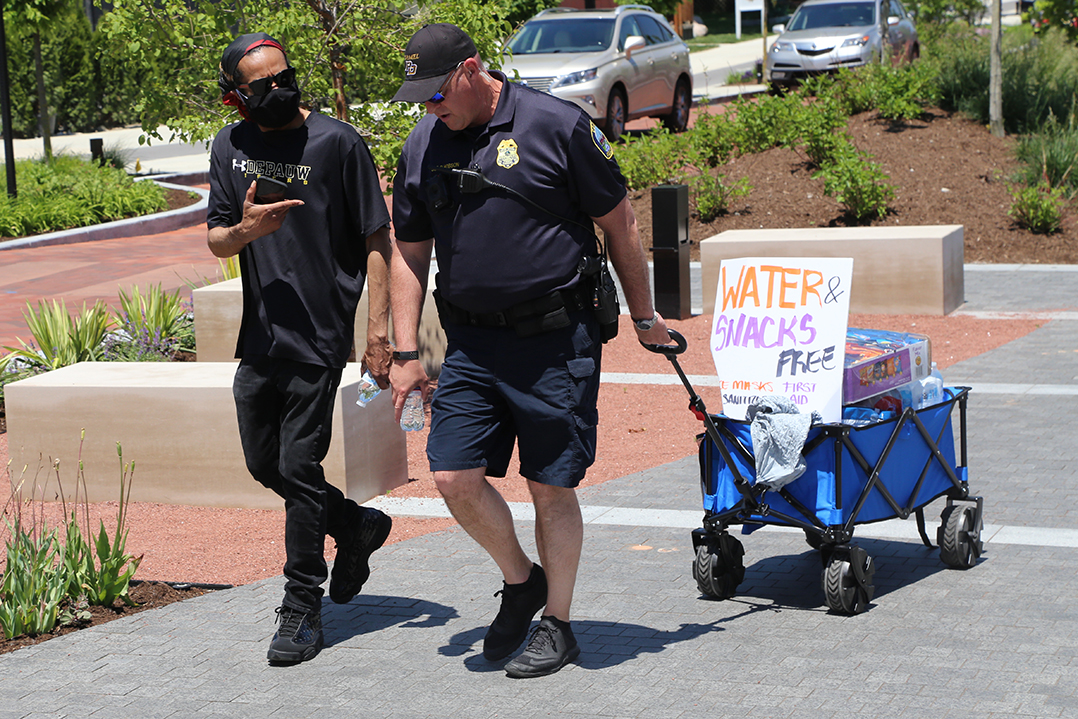 A Carmel police officer pulls a wagon with free drinks and snacks as he walks alongside a protestor. (Photo by Ann Marie Shambaugh)

‘Danger’ in some demands

In the meantime, Barlow said CPD has been meeting in recent weeks with representatives of different organizations seeking police reform. Among the topics discussed have been demands listed in an online petition started in June that has nearly 3,500 signatures.
Among the demands in the petition are:

Barlow said CPD already does many of the things demanded in the petition, but there are some areas in which he’s not willing to compromise. He doesn’t think it’s a good idea to completely ban chokeholds, for example, because in some cases it may be the only way officers can protect themselves or members of the public in a deadly situation.

“There’s a danger in saying, ‘No matter what,’” Barlow said. “It puts citizens at risk. It puts officers at risk. That’s the danger in some of those requests.”

CPD is working to update policy in other areas, such as releasing information on incidents where officers use force in real time rather than compiling a single annual report on all incidents for the year.

Barlow also plans to open up CPD’s use of force training to the public so residents can learn how officers are trained to make life-and-death decisions in split seconds during dangerous situations. 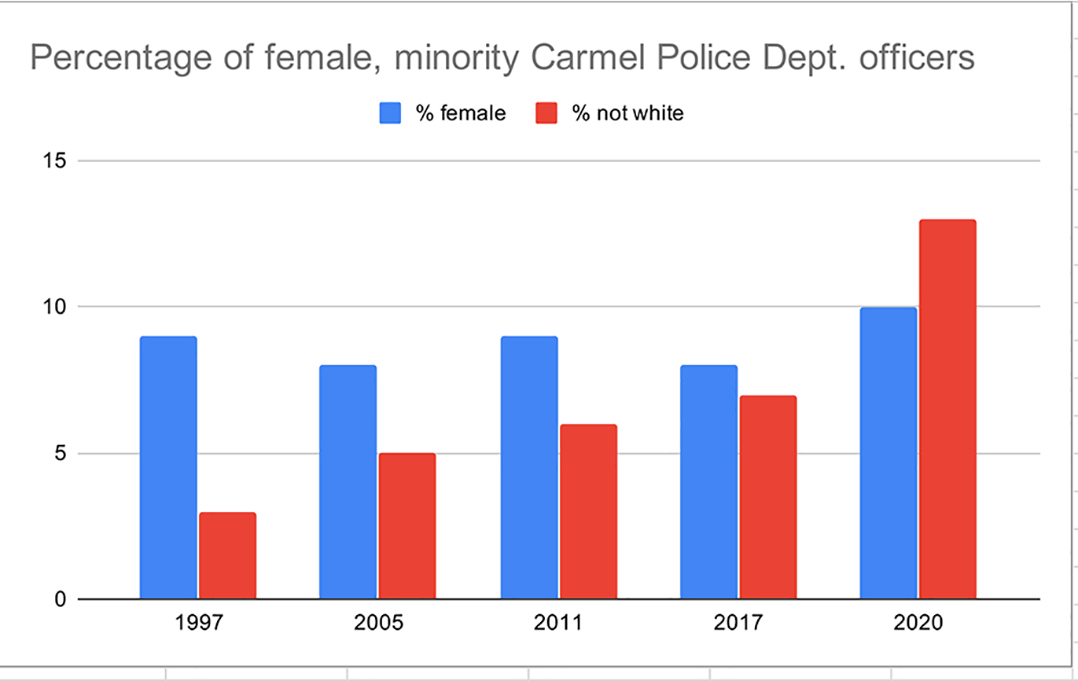 ‘Way ahead of the curve’

Barlow said CPD has been focused on increasing the diversity of its police force for years and requires its officers to complete regular training on the many cultures and religions of Carmel residents. Information from CPD shows that the percentage of female officers has remained near 9 percent since 1997, but in that time the number of non-white officers grew from 3 percent to 13 percent.

Carmel Mayor Jim Brainard said the city has gone to great lengths to promote transparency in its police department, becoming one of the first local departments to mandate dashboard cameras in police cars more than 20 years ago. CPD began requiring officers to wear body cameras in early 2019.

He also pointed to CPD’s accreditation with the Commission on Accreditation for Law Enforcement Agencies, which requires agencies to meet a variety of standards of excellence. CPD is one of 15 municipal police departments in Indiana to receive CALEA accreditation.

“Our police department is a really good department,” Brainard said. “It can be better, of course, any organization or institution can be better, but we don’t have the systemic problems we see in other (departments) across the country. We’ve been way ahead of the curve.”

Barlow acknowledges CPD isn’t perfect, but he said improvement will come as officers take time to listen to the residents they serve and vice versa. During a recent demonstration against police brutality, several officers — including Barlow — marched with protestors to show their support for improving law enforcement locally and nationally. As they marched, they discussed their perspectives and tried to learn more about each other.

Barlow said he’s invited protesters to come on ride-alongs with officers to get a better understanding of what police do.

Barlow said CPD has had officers retire because they were suffering from post-traumatic stress disorder after years of dealing with disturbing situations on the job.

“If we can take care of those issues, they don’t turn into an unnecessary use of force (situation) because you’ve had things build up for 10, 12 or 15 years,” Barlow said.

CPD assigns new officers to work with a veteran officer as a mentor, and in 2019 it began providing an on-staff mental health consultant. The department also expanded counseling resources.

Barlow believes that addressing both the physical and mental stresses of working as a police officer could help prevent some police-involved tragedies. He wonders if it would have made a difference in the death of George Floyd, who was killed in May when a Minneapolis Police Dept. officer knelt on his neck for nearly nine minutes.

“We can reduce these problems where all of a sudden you have an officer doing a terrible thing like in Minnesota,” Barlow said. “I’m curious to see what was going on. No matter what (Floyd) did, he did not deserve that. You wonder if the agency failed (the officer) and missed things?”