Beef & Boards Dinner Theatre has announced its next production will be the bluegrass gospel comedy “Smoke on the Mountain,” starting Aug. 13. 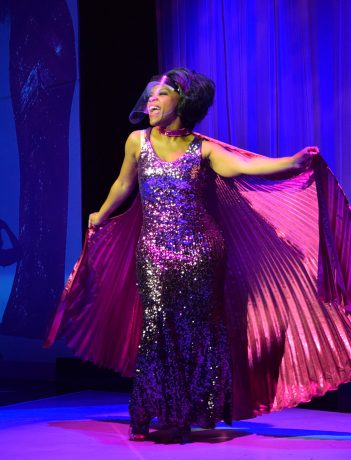 Laura (Christine Zavakos) sings “Will You Still Love Me Tomorrow” in “Beehive: The ’60s Musical,” which runs through Aug. 9 at Beef & Boards Dinner Theatre. (Submitted photo)

Maintaining its commitment to a responsible reopening, Beef & Boards is postponing the originally scheduled production of “Disney’s Newsies” until the fall of 2021. With a smaller cast, “Smoke on the Mountain” will allow performers to follow safety protocols, including necessary distancing on and off stage. Tickets already purchased for “Newsies” are automatically valid for “Smoke on the Mountain” at the same date and time. Those who have reservations for “Newsies” who do not wish to attend “Smoke on the Mountain” will receive the amount they paid in a gift certificate for use for a future production of their choice. The gift certificate does not expire.

Set in 1938, “Smoke on the Mountain,” which runs through Sept. 27, tells the story of the first Saturday Night Gospel Sing at a country church in North Carolina’s Smoky Mountains. The show features two dozen rousing bluegrass songs performed by the Sanders Family, a traveling group making its return to performing after a five-year hiatus. Pastor Oglethorpe, the enthusiastic minister of Mount Pleasant Baptist Church, has enlisted the Sanders Family in his efforts to bring his tiny congregation into the modern world.

Between songs, each family member “witnesses” – telling a story about an important event in their life. Although they try to appear perfect in the eyes of a congregation that wants to be inspired by their songs, one thing after another goes awry and they reveal their true and hilariously imperfect natures.

After developing a comprehensive reopening plan during its nearly four-month intermission, Beef & Boards welcomed audiences back in July with “Beehive: The ’60s Musical.” Audiences are smaller and spaced farther apart. In lieu of its traditional buffet, Beef & Boards offers plated meals from servers in protective gear. Guests’ temperatures are taken as they arrive, and anyone measuring more than 100.4 degrees will not be admitted into the theater. Guests are required to wear a mask to enter the theatre, in compliance with Mayor Joe Hogsett’s mandate that requires masks in areas where the public gathers indoors.