When Dick Surber attended his first Sertoma of Broad Ripple meeting nearly a decade ago, he knew nothing about the organization or its mission. 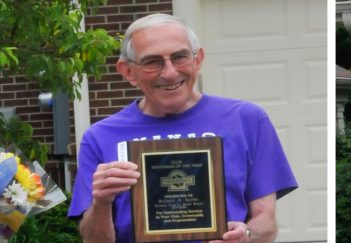 “I was asked by a friend to attend a lunch to see what it was like,” the Carmel resident said. “I had never belonged to a service club. I had never heard of Sertoma. I was skeptical at first but gave it a try.

“Joining was a good decision.”

In light of his impact, Surber’s decision to join Sertoma — an organization of approximately 500 service clubs in the U.S. and Canada — was mutually beneficial.

Last month, Surber was named the Broad Ripple chapter’s Sertoman of the Year for 2019. Sertoma of Broad Ripple is the largest Sertoma club in the U.S., according to the group’s publicity chairman, Ken Shultz.

“We raise funds to give to charity by hiring ourselves out to put on casino parties for businesses and charities,” Surber said. “I deal blackjack at these parties and have so much fun playing the games with our clients. Last year we gave away almost $150,000.”

An avid skier and hiker who has climbed Mt. Kilimanjaro in Tanzania, Kala Patthar in Nepal and Mt. Whitney in Calif., Surber has a chemical engineering degree from Purdue University and has worked for three major corporations, most recently as vice president of quality for Inland Paperboard and Packaging.

He has been especially active in Sertoma since retiring from the business world.

“This club is full of very accomplished and talented men,” said Surber, who lives with his wife, Lois, near the Monon Trail. “Winning this award from a group so talented and hardworking is a great honor and quite humbling.”