His self-published novel, “The Ethereal Road: A Soul-itary Tale,” was released in late June. 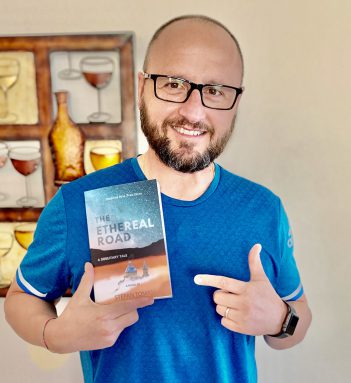 Carmel resident Stefano pauses with a copy of his first novel. (Submitted photo)

“What I’m trying to portray here is the spiritual empowerment that everyone can achieve by finding the spirituality in themselves,” said Tomasi, who moved from Italy to Carmel 20 years ago.

His main character, Giulio Monaldi, moved to the U.S. from Italy as a child with his family in the 1980s.

“He’s a financial advisor and he looks back on his life at a certain point and realizes there is a spiritual void in his life,” said Tomasi, whose character learns he possibly has a terminal illness. “There are flashbacks in the novel but what is central is his relationship with God.”

Tomasi does have a sequel in the works and is planning at least a three-book series in what he describes as a thought-provoking story set between Tuscany and Chicago.

“It’s a unique look at the modern-era spiritual department,” Tomasi said. “Most of the topics I convey in this tale are pertaining to the human condition, like the moral questions and different attitudes that are affected today in spirituality itself, life and death and our relationship with society.”

Tomasi said he enjoys the writing process and has attended workshops to hone his craft.

“But at this particular point in time, I think the world is undergoing a very dramatic spiritual transformation, especially in the last decade,” he said. “The main cause is a pervasive decrease in faith in centuries-old dogmas and inconsistency shown by current spiritual leaders. I think people are trying to reject old dogmas and find truth within their own.”

Tomasi, who works for a health care company, said the book took about five years to write.

“I had to suspend development of it when I went to China for a job assignment,” he said. “For a year and a half, I didn’t even touch the book.”

Four years ago, Tomasi moved to China for a year with his family for 13 months and then had to return on his own a couple of times.

Tomasi and his wife, Lisa, have a son, Lorenzo, 15, who attends Carmel High School.

The book is available on Amazon.com.