You are at:Home»Current in Zionsville»Zionsville Cover Stories»Bike to be Heard: Community gathers to oppose racism

Dozens of central Indiana families arrived at an empty parking lot late on a Saturday night wearing helmets and riding bicycles — families of all races, ages and backgrounds. They gathered to ride and, they hoped, to be heard.

Countless protests have been held internationally in response to the death of George Floyd, a Black man who was killed in police custody May 25 in Minneapolis. In numerous locations in the United States, protesters were met with tear gas and other nonlethal responses by police. Protestors also damaged property in several cities. Aaron Williams, a Black Zionsville resident, said the events created an uncertain and potentially unsafe environments, so he and others created a free, safe event for central Indiana residents called Bike to be Heard. 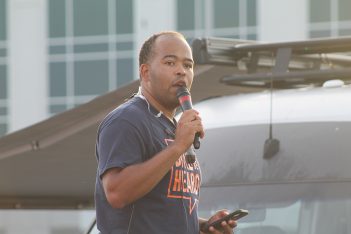 Aaron Williams speaks to a crowd at Bike to be Heard. (Photo by Jarred Meeks)

Bike to be Heard was held July 18 in Zionsville to advocate for the end of systemic racism. The idea came about when Williams rode his bike with a neighbor and explored discussed ways to safely unite community. During the bike ride, they decided that a socially distanced bicycle ride was an ideal and safe activity to plan an event around.

“Better is yet to come,” Williams told attendees during the event. “It is up to us to make that happen and to bring about that change.”

Among those in the crowd were some of Williams’ family, including his father, Olgen Williams, five of his six brothers and many of their children. Olgen was amazed by the turnout and declared it an example for other communities in Indiana.

Olgen said he raised Aaron and his brothers to respect law enforcement. He said they were “taught to love his brother” and that “no person is perfect.” He added that the principles he instilled in Aaron led him to view law enforcement from a nuanced perspective.

“Given the work that police officers do in our community and how they put their lives on the line, men and women, every day, I tell people when police leave my neighborhood I’m going to be in the same caravan with them because I value their work that much,” Olgen said. “None of us are perfect. No person on the workforce is perfect, so we’ve got to work out the imperfectness and then keep on moving. We can’t throw it out the door because of a few incidents.”

“We’ve seen a lot of back and forth with our law enforcement community, and one thing that I’ve been able to do is meet with members of our law enforcement community and our elected officials to bring about change,” Williams said. “And I’ll tell you this — I learned this from my mentor, my hero, my dad – I’m not for, whatsoever, defunding the police (or) abolishing the police, because if they leave, give me a five-minute warning because I’m going with them.”

At the end of his speech, Williams called for the crowd to commit to a pledge he said will ensure the next generation of children are not subjected to the same inequalities and experiences.

The pledge read: “I am committed to a better tomorrow. I pledge to make this world a better place for the next generation than the one that was given to me. I will seek out and celebrate diversity. I promise to listen, learn and then act as an agent of change. I will look for ways to teach my children, my neighbors and my friends to bring an end to systemic racism in our lifetimes. I believe that a brighter future is possible, and it will start with me!” 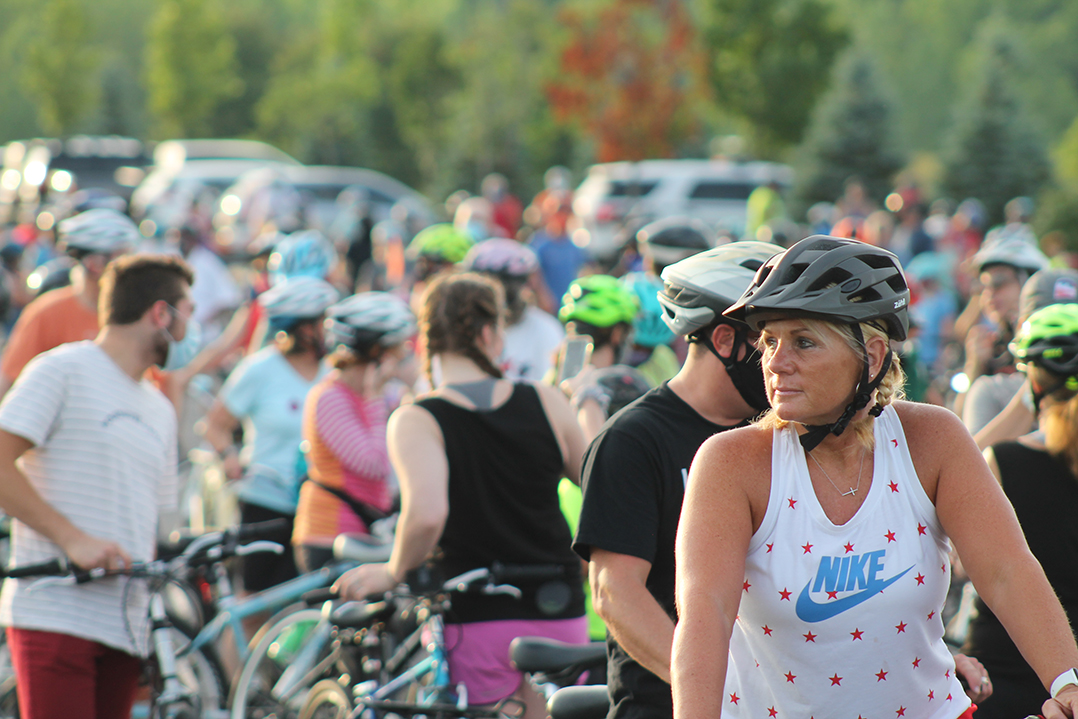 Teaching the next generation

The Borror’s said they wanted to give Quinn the opportunity to show support for racial inclusion and be involved in activism at a young age. For them, Bike to be Heard was a perfect opportunity in a safe environment.

“You don’t know what could happen” Genna said about other protests.

With the rise of internet connectivity and social media platforms, she said the world has responded in greater numbers to recent events compared to the L.A. riots in the ‘90s and more recent events in Ferguson, Mo.