You are at:Home»Current in Carmel»Carmel Cover Stories»Calling it a career: Cox leaves legacy of unified sports, success factor formula as IHSAA commissioner

When Bobby Cox became Carmel High School athletic director in 1997, he figured it would be the final job of his career.

Three years later, the 1975 CHS graduate got an application to apply for the Indiana High School Athletic Association assistant commissioner post after Blake Ress was promoted to commissioner.

“I didn’t know if I got it because people were trying to get rid of me at Carmel or they really wanted me at IHSAA,” Cox said. “(When) I told my principal, Bill Duke, I’m going to apply for this job, he said, ‘We’ll be looking for a new AD.’ I said, ‘They’re not going to hire me. I’m the last guy they are going to hire.’ Well, I was wrong, and they hired me to replace Blake (Ress).” 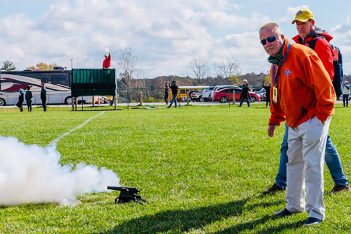 As assistant, Cox was in charge of football, boys and girls track and field, boys golf and wrestling. When Ress retired, Cox was named his successor, becoming commissioner in 2011. Cox, 63, announced his decision to retire in January. His final day will be July 31. Paul Neidig becomes commissioner Aug. 1.

One of the things Cox is most proud of during his tenure is the partnership with Special Olympics Indiana and the development of the Champions Together program, an outgrowth of Unified Sports.

“It’s really been gratifying because the kids who have intellectual difficulties love their high school like regular kids do,” Cox said. “They just don’t have a way to express it. We had an opportunity to partner with Special Olympics, learn about inclusion, learn about Unified Sports and develop our Champions Together program. We sold that notion to our membership. We told principals if you want to have a better culture in your school, you need to do this because it’s going to reduce bullying, it’s going to create an environment of inclusion and acceptance and it’s going to make your school a better place to go every day.”

Cox said that is especially true at larger schools like Carmel. It gives students with intellectual challenges an opportunity to be part of the mainstream. There are four Unified Sports, with flag football and track and field IHSAA-sponsored. Bocce and bowling are Special Olympics-sponsored sports. Cox plans to continue to help with the Champions Together program in retirement.

Lee Lonzo, who Cox replaced as CHS athletic director when Lonzo became assistant principal, is the director of Champions Together. Lonzo, a longtime friend, had Cox as a junior for U.S. history class during Lonzo’s first year of teaching at CHS.

“When you consider he had just three years as high school athletic director and made it to be assistant commissioner and the commissioner, it’s pretty amazing,” said Lonzo, who was asked by Cox to work with the IHSAA Student Advisory Committee.

That led to the Unified Sports initiative.

“The lives it touches and the lives it’s changed, both for kids with disabilities and without disabilities, has been amazing,” Lonzo said. “I know one of the things Bobby is most proud of is it was student-initiated and student-driven the entire time.”

Another accomplishment of his tenure, albeit the most controversial, was establishing the Tournament Success Factor in 2012.

“We had to address competitive balance in our state,” Cox said.

Through the system, teams earn points in the state tournament that might move the team up a class in enrollment size for a two-year period before the next reclassification.

“If you are a small school dominating a smaller class, winning multiple championships, maybe you need to move up and play someone better in that particular sport,” Cox said. “While the vast majority of the membership supports it and understands why, there are some that don’t like it because they have to play somebody tough. You’ve got to play someone good to win, and sometimes people don’t like that.”

Cox said Indiana’s Success Factor has been mimicked around the nation because it’s a more equitable way to address competitive balance.

Another important achievement Cox said was founding the IHSAA Foundation six years ago.

“We are trying to raise money for the next generation of education-based athletics,” Cox said. “You have to give people a reason to donate and invest. At the same time, you have to have programming to demonstrate what you are doing.”

The foundation provides grant money to schools and scholarship money to students. Cox will stay on the foundation’s board, starting a four-year term.

The final months of Cox’s tenure have been filled with dealing with the COVID-19 pandemic. The boys high school basketball teams were headed to regional action March 14 when play was halted and eventually canceled.

“It wasn’t a difficult decision, but it was an emotional decision,” Cox said. “It was obvious we had to stop the tournament. Everybody around us was stopping activities and it became apparent that is what we needed to as well. I know how our communities look forward to the tournament. It was hard to take that away, but I still feel it was the right thing to do.”

As the pandemic worsened, Cox said it became apparent there would be no spring sports season, another difficult decision emotionally.

“I feel for all the kids, especially the seniors who didn’t get that last season,” he said.

The IHSAA has a rollout plan to resume athletic practices and competition in connection with the state’s pandemic guidelines.

“Each school is a little different,” he said. “Every school superintendent and school board have to figure out what is most appropriate for their community.” 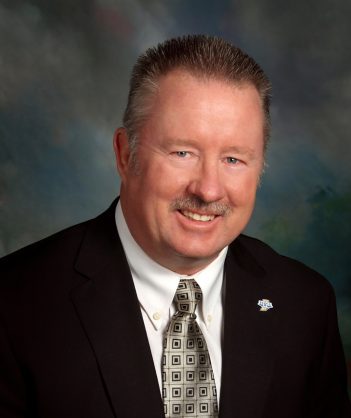 Personal: Graduated from Carmel High School in 1975 and Butler University in 1979. Ran cross country and track at CHS and Butler. “It was a great opportunity for me, and my parents could stay local and see me compete,” he said. He married Kathy in 2001. Kathy had replaced Cox as Clay Middle School athletic director in 1997 and retired in 2012. After selling his Carmel home in September 2019, the couple moved to a rented home in Carmel. When many people started to work from home during the pandemic in March, the couple moved to their lake home in Warsaw on Winona Lake. “We like boating, and we want to travel,” said Cox, an avid golfer. The couple have a winter home in Port Charlotte, Fla.

Career: Got a job with Carmel Clay Schools after graduating, teaching health and physical education at Clay Junior High School (now Clay Middle School). He spent 18 years at Clay, 11 years as a teacher and cross country and track coach and then seven years as Clay athletic director. He also was a girls basketball coach at Clay.