“They really emphasize on showing others that they care,” Sharma said. 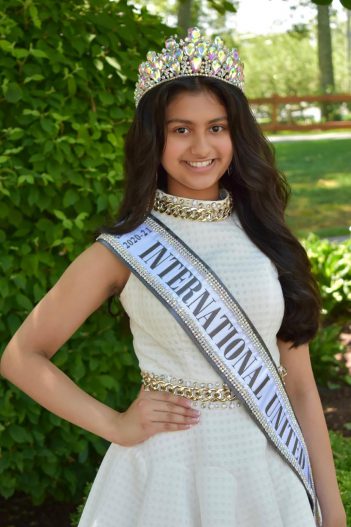 “The best part was meeting everyone, and all the themed parties were fun,” Sharma said.

Sharma, who turns 14 in August, competed in the weeklong event with girls from across the U.S. in the areas of evening gown, personal introduction, personal interview and high-fashion runway. Sharma, who was appointed as the Indiana pageant representative, won the academic achievement and talent awards and was the first runner-up for community service.

Sharma performed a Bollywood dance on stage at the pageant. She chose the live performance instead of a taped performance. The academic honor was selected by her transcript from school and recommendations from teachers. Her community service was judged on several contributions.

“We collected Disney toys and were able to donate them across the country,” Sharma said. “As a part of the community service that we did, we made over 850 masks for front-line responders and health care workers in Indiana and other states. It was cool because I learned how to sew for the first time.”

Sharma and her sister, Anitha, created a video titled “How to Make Masks at Home” that was featured on WRTV-6. The masks project took two months and was started in mid-March.

“We knew there was a shortage, so that inspired us to start doing the masks,” she said.

Sharma planned and conducted a food drive for senior living communities. She put together an instrumental music video produced in collaboration with her friends and shared with senior communities. She and her family also donated meals to the Ronald McDonald House of Charities. Due to the coronavirus pandemic, they were not able to do a live service as in the past.

“So, we donated little meals that they were able to eat there,” she said.

During her year of reign through July 2021, as part of her prize package, Sharma will take four trips:  A weekend trip to Disney World in Orlando, Fla.; a weekend trip to Washington, D.C., where she will participate in the community service event of Wreaths Across America at Arlington National Cemetery; a weekend trip to New York City; and an all-expense paid weeklong trip to Riviera Maya, Mexico.