You are at:Home»Current in Westfield»Westfield Community»‘Here to serve’: Business partners give back through baseball

Cody Young and Jason Van Skike already knew each other as family friends, but the pair recently partnered together for the Edward Jones office at 14747 Oak Rd., Suite 200, on the Carmel Westfield border. They also give back to the Westfield community through their mutual love of baseball. 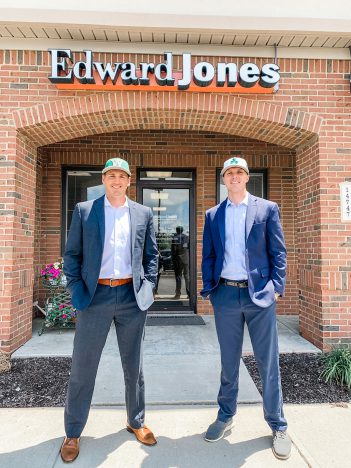 Cody Young, left, and Jason Van Skike are partners at an Edward Jones office in Westfield. They are baseball coaches at Westfield Washington Schools. (Submitted photo)

“I knew I wanted to call the Westfield area home. I really kind of fell in love with the area and could see its potential,” Van Skike said. “I thought it would be a good place to raise a family someday. I came here and the job opportunity opened at Edward Jones and shortly after, the high school pitching coach left, so it was right place right time, so I took that position.”

Young is married to Brittany, and they have two children – Evelyn and Jack. Young was quickly able to get involved with coaching at the school prior to moving to the city.

“We are here to serve. I feel like the calling on my life is service in this area, whether that’s serving my family, serving my clients and serving the youth of Westfield,” Young said.

“For me, baseball had no question been the biggest part of my life and now being able to invest in this town to where I can share some of those experiences, and not only that but give back to the game that’s given me so much,” Van Skike said.