You are at:Home»Current in Zionsville»Zionsville Cover Stories»Distilling a dream: Bringing ‘the perfect tasting’ room to Zionsville

On the second floor of Alchemy Spirit House, Mark Nigbur created a trick bookshelf that, when pulled open, reveals his secret office. 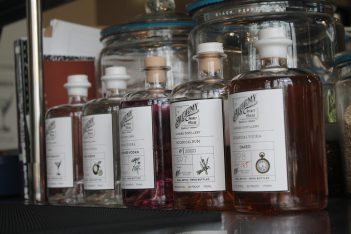 With long hair, a T-shirt and bead bracelet, one could be fooled into believing Nigbur designed the space as an escape, a way to disappear and revel in the soft acoustics of Jack Johnson’s beach-friendly music that plays through the distillery’s sound system. But Nigbur, who co-owns Alchemy Spirit House with his wife, Laurie, instead creates new set lists, much like how a band would determine a set list of some of its best music and tape it to the floor when performing a concert. He creates a new set list for his spirites each night at the micro-distillery, and, as a result, customers are treated to the perfect pairing of a peanut butter and jelly sandwich with a cocktail.

Nigbur began distilling spirits in the early 2000s in Colorado Springs, Colo., where he was born and raised. He established what he said was one of the first micro-distilleries in North America shortly after in 2004. It was a small brand, shipping 100 cases a month of a grain-based vodka called Altius. After a couple of years, Nigbur caught the attention of a California company that wanted him to establish a distillery on Maui. He accepted the offer in 2006.

In Maui, Nigbur’s distillery sold 50 cases of spirits a month in the beginning. During his time on the Hawaiin island, he also met his wife, who is from the Zionsville area. When he left Maui in September 2019, the distillery was selling more than 100,000 cases a year. 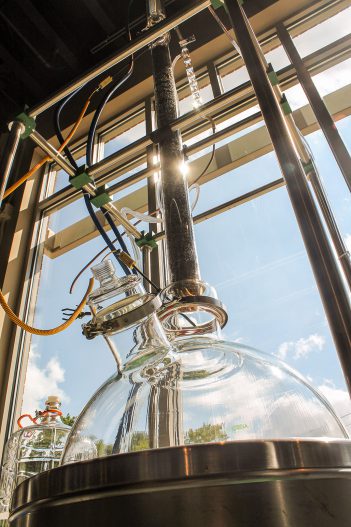 Alchemy Spirit House distills its spirits with a 100 percent borosilicate glass still with a 14-foot column Mark Nigbur designed on a napkin during a flight 18 years ago.

“It just got way too big on Maui,” Nigbur said. “It’s hard to create when you’re doing a brand that sells 100,000 cases a year, even though that’s small compared to what Tito’s (Vodka) is doing. It’s still hard to create and come out with what I call a boutique brand.”

Unlike most who begin tinkering with homemade alcoholic beverages with the dream of one day opening their own microbrewery, Nigbur was never tempted to brew beer. In fact, he never has, despite distilling spirits for almost 20 years. He focused on a simple concept, one he’s toyed with in his mind for 10 years: Serving spirits served in the perfect tasting room.

Nigbur wanted customers in his perfect tasting room to see what he was distilling, to smell the alcohol fermenting on the other side of the room. On July 23, he fulfilled his dream when he opened Alchemy Spirit House on 640 S. Main St. He and his wife had regularly traveled back to Indiana to visit her family. Initially, they considered California, Nebraska, Tennessee and a few other sites across the country for the tasting room, but the property, the highly rated schools for their 1-year-old son, Harrison, and the advantageous timing of the previous tenet vacating the lease made Zionsville their first choice.

Alchemy Spirit House is open from 3 to 7 p.m. Wednesday through Friday and from 11 a.m. to 7 p.m. Saturday and Sunday. Distillery tours are given at 1 p.m. each Sunday. For more, visit alchemymicrodistillery.com. 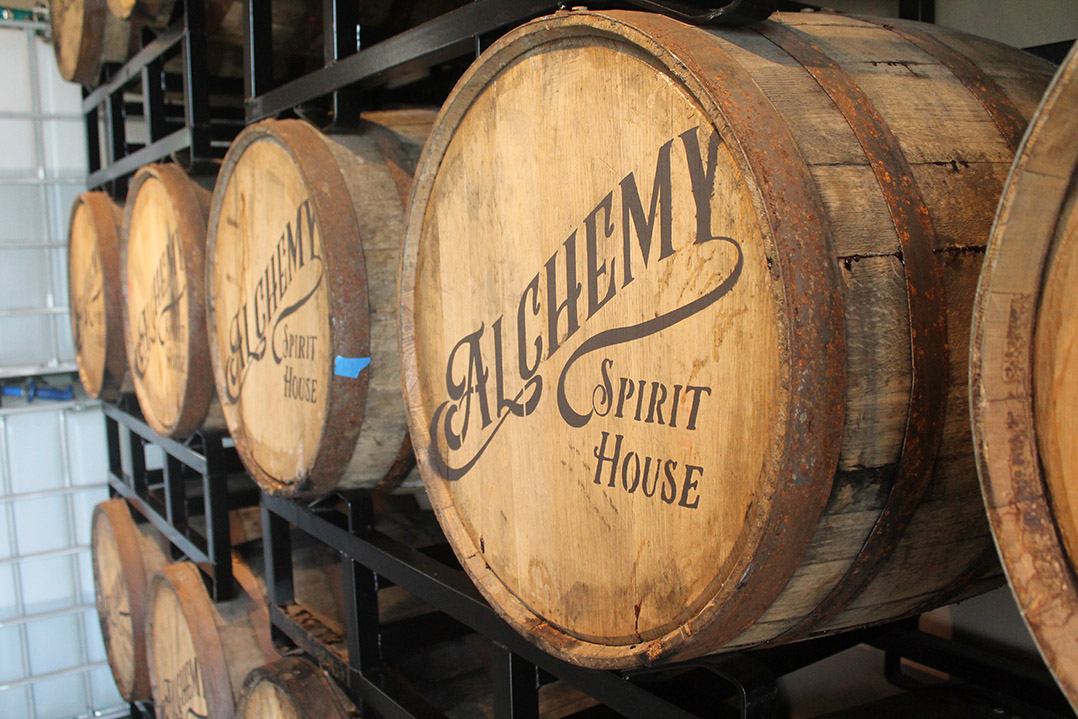 Nigbur said the process of turning raw ingredients into a spirit takes four to five days.

“I wanted a place you could come, taste craft spirits that were made right in front of you and see it all being done,” Mark Nigbur, co-owner of Alchemy Spirit House, said.

At Alchemy Spirit House, only a glass wall separates customers from the distillation process. When they sit down to enjoy a cocktail and/or one of the food items, they can see everything made as they drink.

What separates Nigbur’s distillation process from other distillers is that he distills with a 100 percent borosilicate glass still with a 14-foot column he designed on a napkin during a flight 18 years ago and has since patented. Nigbur, who has a background in chemistry, said the still, in one distillation, allows him to produce “the purest alcohol that I’ve found.”

Michael Szczepanski, a distiller and mixologist at Alchemy Spirit House, said Nigbur’s passion for science has affected his view of the subject.

“I didn’t like science in high school,” Szczepanski said, “but I think when it’s presented in a way that is appealing to you, I think that’s really important. I like science now.”