You are at:Home»Current in Carmel»Carmel Cover Stories»‘It’s been an adventure’: Carmel resident keeps adding to powerchair soccer success

Reluctant at first, Natalie Russo gave Power Soccer a try when she was 14 and has never stopped. Her power wheelchair soccer skills have afforded Russo, who has spinal muscular atrophy, a genetic disease affecting the central nervous system, many special opportunities.

The Carmel resident was invited as a special guest foreign player to compete in an Australian Club Championships tournament in January.

“Everybody would love to have the opportunity to go play in another country with a foreign team,” Russo said. “It’s always been a dream of mine, so I definitely jumped at the chance. It might be the coolest thing I’ve done in Power Soccer.”

Playing in the 2017 World Cup in Kissimmee, Fla., was another thrill.

“Those are my top two, for sure,” the 2007 Carmel High School graduate said.

Russo’s trip to Australia was paid for by the team’s sponsors.

“What we saw in Natalie’s play was a very experienced player who has had experience playing with a number of the world’s powerchair footballers,” he said. “We saw a great opportunity in bringing her over to gain experience from her as well as allowing our team to play with someone of her high caliber. We were definitely impressed with her passion for the game and what she brought to our team, knowing that she had come from a three-day Team USA training camp, hopped on two planes and flew to Sydney straight after to play for us shows her passion and commitment for the sport.”

“It has been such a blessing to have had the opportunity to accompany her on these trips and just see her thrive in this environment,” Karen said. “She is a great teammate on and off the court. It’s been more than a sport, it’s been an adventure.”

“The sport is focused on what you can do rather than what you can’t do,” she said. “It was truly a gift for a young girl learning to accept her disability among many others, where there are many challenges in their daily lives (and) Power Soccer was not one of them. She found success early on, which set her on a journey to discovering all the sport had to offer, a network of friends, common challenges, learning how to be a good winner, learning from defeats and overcoming adversity.”

Natalie Russo’s Circle City Rollers’ powerchair soccer league season was canceled in March because of the coronavirus pandemic. She has been quarantined in her Carmel home since mid-March.

“I don’t have very good respiratory muscles and (have 18 percent) lung capacity, so if I did catch the coronavirus, it wouldn’t be good,” she said.

Prior to the pandemic, Russo had weekly training assignments from Team USA. She is one of 12 members of Team USA that will be trimmed to eight before the World Cup.

The World Cup, set for Australia, has been postponed from October 2021 to October 2022.

“We’re putting off all Team USA training until April of 2021,” said Russo, who owns a website design services company. 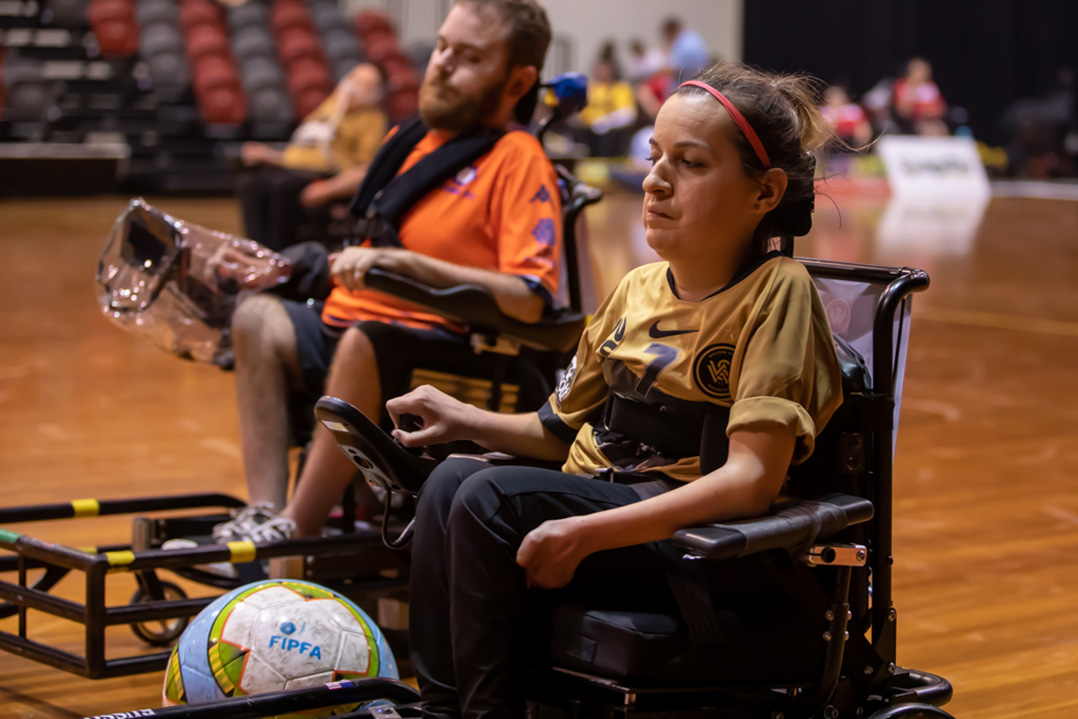 Karen Russo and her husband, Dominic, run a nonprofit called Power Soccer Development Group, which promotes the sport through clinics and hands-on learning to power wheelchair users and their families across the nation. Her brother, J.C., who lives in Wichita, Kan., also has spinal muscular atrophy and was a powerchair soccer competitor.