After 25 years of leading the St. George Orthodox Christian Church through growth and change, Pastor Nabil Hanna will move to Los Angeles to serve as the pastor at St. Nicholas Cathedral in Los Angeles later this month.

“I’ve been with the (St. George Orthodox) parish since 1995, 25 years, and we just (recently) celebrated that with the parishioners,” he said. “It was a 25-year (celebration) and sendoff.”

Hanna’s first Sunday in Los Angeles will be Aug. 16.

Established in 1926 in Indianapolis, St. George Orthodox Christian Church moved to Fishers in 2013.
“We relocated up here to follow where our people were. About 80 percent of our people live within a 10-mile radius of this location,” Hanna said.

Pastoral assignment is decided by the Orthodox Christian Church Bishops.

“The bishops do the assigning. They just have to assess needs and see where is the best fit,” Hanna said.

The bishops assigned Rev. Anthony Yazge to replace Hanna at the Fishers church. Yazge was most recently the director of an Antiochian Village camp in West Virginia. He served there for 14 years. Prior to that, he served at St. George Orthodox Church in Terre Haute for 18 years.

Yazge looks forward to his new assignment at the church.

“The idea that this is one family in Christ here, that it’s really exciting for me coming back into parish ministry after doing camp and youth ministry for 14 years,” Yazge said.

Because he previously worked with young people during two-week camps throughout the summer, Yazge is familiar with some of the St. George parishioners who sent their children to camp.

A smooth transistion is expected becasue Hanna and Yazge servied together for a few weeks prior to Hanna’s departure.

“It doesn’t always happen this way, but in this case, it was a wonderful opportunity to be together for three Sundays and other services during the week,” Hanna said. “Sometimes, (pastors) just leave and the other one comes in. This time, there was an opportunity to have a good pass off and passing of the baton. I know it will be seamless.”

“We were classmates and got to know each other when we started in 1986,” Hanna said. “We’ve been friends.”

Hanna said his proudest accomplishment during his time at St. George Orthodox Christian Church was building a sense of family within the parish.

“No matter what peoples’ backgrounds are, and we are very diverse, we are all one in Christ, and that’s our bond,” he said. “We have God as our father, and that makes us all brothers and sisters.”

Hanna said the biggest challenge in moving to Los Angeles is the impact of tight COVID-19 restrictions in California.

“It’s much worse out there. They cannot have anything indoors,” he said. “They are doing services in the parking lot. It’s a large community there in Los Angeles, so how do I meet people, how do I get established? That’s going to be a major challenge to find people and keep them connected to the church in this strange time.”

Hanna’s three adult children live on the West Coast: Two in Portland, Ore., and one in Southern California. 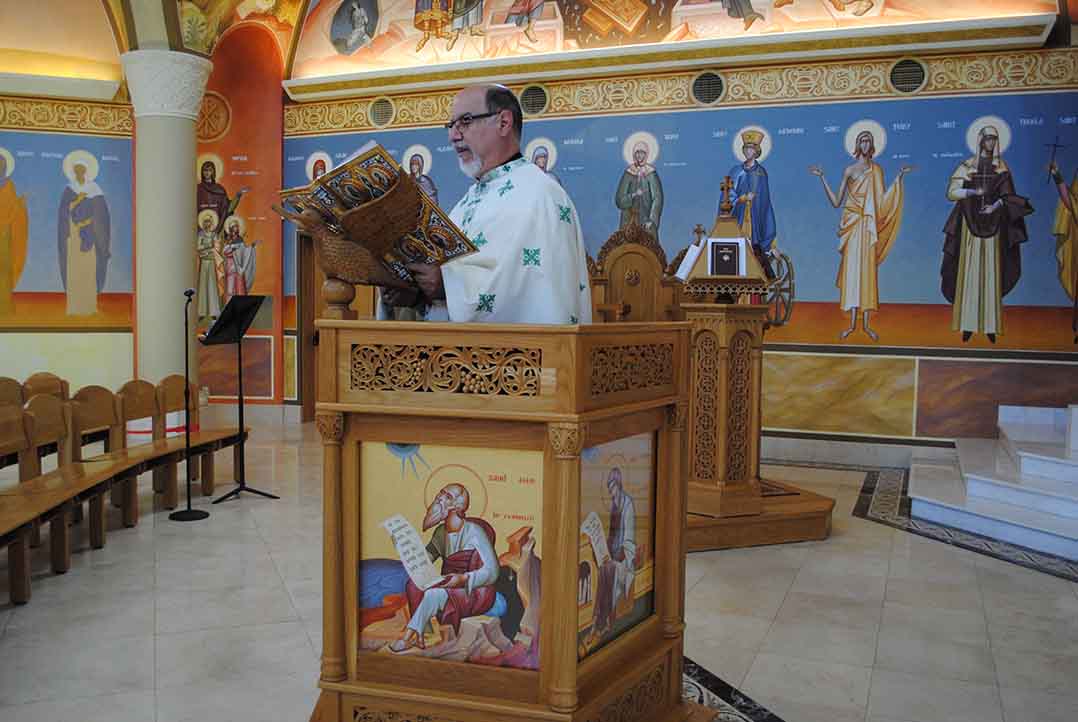 Although not as confining as California’s, St. George Orthodox Christian Church in Fishers has its own COVID-19 restrictions. One hundred parishioner can attend in-person, and another 100 can visit the church but watch on a television in a separate room. Other parishioners can view the service online.

Another interruption is the iconographers from Greece finishing the church’s iconography. They had to abruptly return to Greece on an evacuation flight due to the pandemic. When restrictions ease, the iconographers are expected to return and complete their work.