You are at:Home»Night & Day»Entertainment News»Bibeau to sign book at Meet Me on Main
Darin Bibeau has chased after cocaine smuggling boats, worked security in post 9/11 New York City, kept the peace between warring tribes in Asia — all while serving in the U.S. Coast Guard Special Ops Team. The Carmel resident has just authored his first book, “Back to Bulletproof  – A Warriors Tactical Guide to Success,” where he shares many life lessons from his time in the military and in the business world. 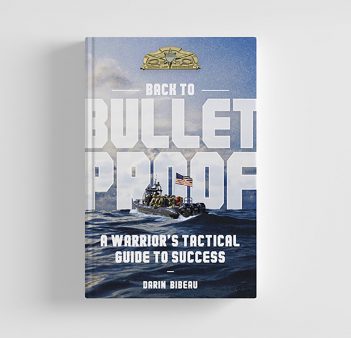 From 5 to 8 p.m. Aug. 8, visitors can purchase an autographed copy of Bibeau’s book during the Meet Me on Main event in the Carmel Arts & Design District. Bibeau will be set up inside the All Things Carmel Store, 110 W. Main St.
As an author and motivational speaker, Bibeau attends events and meets people all over the U.S., sharing the core principles he’s learned on each stop of his journey, and how they helped mold him into a peacetime warrior on a mission of helping others take aim at personal and professional growth.
Bibeau was born and raised in Plattsburg, N.Y. He joined the Coast Guard in 1994 with recruit company Delta 144. During his time with the Coast Guard, he served as a Special Operator and then a private government contractor all over the world. He has been in operations on the high seas and remote areas around the globe, including places he says he never wants to go back. Since then, he has made his transition into the civilian world and now runs and owns successful American manufacturing companies, most notably, National Chimney/Natural Light Energy Systems. He has nine factories and more than 300 employees. Bibeau also owns a couple of Crossfit franchises, as exercise is a part of his life. Today, Bibeau spends his time as a motivational speaker and business consultant while promoting his book.
In another feature of Meet Me on Main, Gavin Goode will be the featured artist in Carmel Arts Council’s Art in the Garden event from 3 to 7 p.m. in the Children’s Art Gallery’s garden, which is located next to the gallery at 40 W. Main St.
Goode’s speciality is applying fine art to any interior or exterior surface including wood, concrete, plaster, canvas and vehicles.  Goode’s art can be seen in pubs, restaurants, parlors, museums and even an airport. Goode opened a fine art and design company in 2006, SemperFly Studios.