You are at:Home»Current in Carmel»Carmel Community»University High School transitions 3 sports to intramural season for fall season

University High School has opted for a unique approach to fall sports during the pandemic. 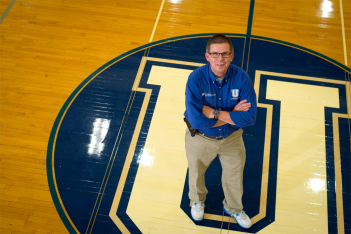 “We’ve changed 18 different times,” Walls said. “After looking at all the time we put in trying to get school ready to mitigate exposure as much as we could and only bringing 50 percent of the kids in each week with a hybrid schedule (50 percent will be taking virtual classes), the one thing that stood out to us is we have 40 percent of our kids playing fall sports.“

Walls said the Carmel private school has a no-cut policy.

“We try to make it a good, all-around experience for all of our athletes,” he said.

Walls said having 40 percent of the student body traveling to other schools created health concerns.

“It just made sense to do it in-house and try to control that exposure,” he said.

Although it’s a noncontact sport, cross country runners often are in close contact.

“So many of our meets are big meets, and they didn’t want to do (the meet) in stages,” Walls said. “I understood that you wanted it to be a competitive race instead of running against the clock. But when you get the athletes out there, they are not thinking about COVID, they are thinking about winning.”

Walls said the No. 1 goal is to keep the students in school.

The intramural season will be eight weeks using IHSAA officials, who were already scheduled for home games, for the intersquad games.

“We’ll keep stats and records,” Walls said. “That way if anyone (from colleges) wants any information on an athlete, we’ll have it. I don’t think we have any Division I (fall) athletes. We lost a lot of seniors last year in our (boys) soccer program with a lot of guys going on to play in college. We’re in a rebuilding year, especially on the boys soccer side.”

“I feel for the IHSAA. It’s in a tough situation,”Walls said. “You’ve got 92 health departments in 92 counties. There are 400 schools There is no template that will work for everybody. That’s the sad part of it.”

Not surprisingly, Walls said some parents and students are disappointed.

“But we held a town hall meeting before we announced it and got out in front of it,” he said. “We let them know what we were looking at and our No. 1 goal was to keep them in the school. There is disappointment, but most understand this is in the best interest of the community.”