You are at:Home»Current in Carmel»Carmel Business Local»The GOAT tavern sets grand opening for Aug. 15 along Monon in Carmel

Kevin Paul has some specific plans for his third Carmel establishment.

“I wanted a small, open-tavern concept that you would find on the East Coast, an old-school-type pub with an open-air environment and super social,” Paul said. “We tried to capture some of the concepts that have been super successful at Brockway Pub and Danny Boy.” 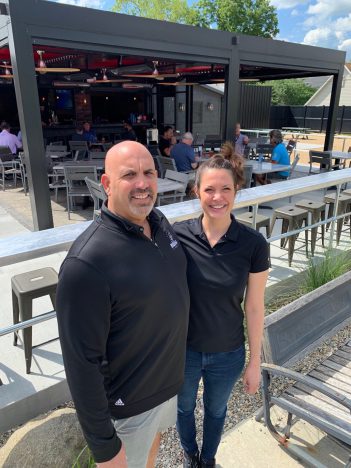 Kevin and Megan Pause outside of The GOAT. (Photo courtesy The GOAT)

Paul and his wife, Megan, own Brockway Pub, an Irish pub, and Danny Boy Beer Works, an industrial brew pub.

The GOAT, which stands for the Greatest of All Taverns, is open to guests 21-and-older. The GOAT replaces Bub’s Cafe, which closed after 12 years in October 2019, along the Monon Greenway south of Main Street.

“The Midtown development has been a tremendous success in my eyes,” Paul said. “We’ve been watching this area for a while. This embraces the active pedestrian, cycling community which Carmel has hung its hat on.”

The bar recently had a soft opening and plans a grand opening Aug. 15 with live music. The tavern is now open Thursday through Sunday, but Paul wants to expand those hours. The walls will include photos of people deemed by Paul to be some of the greatest in their field.

Paul said the bar is appealing to the 25- to 65-year-old demographic at different times of the day. He said it evolves into the bar having different clientele during the 12 hours (from 3 p.m. to 3 a.m.) it is open now.

Megan, who runs the kitchen at The GOAT, said it starts with the happy hour crowd at 3 p.m.

Paul said eventually he plans to have the tavern be open from 11 a.m. to 3 p.m. as staffing increases. When fully staffed, Paul said The GOAT should have 25 to 35 employees.

The menu includes mussels and pasta, crab legs, lobster rolls and pub food like nachos, tacos and smaller burgers with creative toppings. There are puppy snacks for dogs.

“Every menu at each of the three restaurants is completely different,” he said.