You are at:Home»Lifestyle»55 and Better»Play on: Retirees stay active with weekly golf leagues

During the coronavirus pandemic, one way for older adults to stay active has been golf.

Carmel’s Plum Creek Golf Club’s senior league got off to a little slower start before Carmel allowed carts to be used. 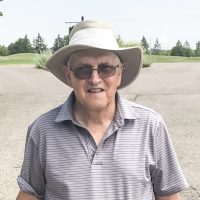 “When it started and you couldn’t use carts, a lot of the older people couldn’t play because they couldn’t walk the course,” Dave Van Vliet said. “We delayed the league start for a month because of that. We usually start in the second or third week in April, and we started in May. Seventy-five percent use carts now and the rest walk. I started walking because of the social distancing.”

“You get some exercise and a chance to socialize a little bit,” he said. “So many people who don’t play golf, and don’t play that much, and they are going stir crazy because you are cooped up in your house. We’re able to get fresh air, enjoy fellowship, and It’s been good for your mental well-being,’

Van Vliet, 68, serves as treasurer for the Plum Creek league.

“It’s basically seniors, but we’ll let anyone play if they want to play,” Van Vliet said. “There are some in their 50s that retired early. There is a core 30 to 40 who play golf every day.”

The league is held Tuesday and Thursday mornings. Van Vliet, who has lived in Carmel for 30 years, said all the members are retirees.

Van Vliet said the league size has been steady with 59. League play ends in mid-October.

“We got a lot of new blood this year and we lost some golfers,” he said.

Van Vliet, who has golfed seriously for the past 25 years, said the teams are balanced by handicaps.

“We usually have a high handicap, two mid-handicaps and one low handicap in the same group,” he said. “The low handicap is about a 2 for the tees we are playing and the high is 25. It’s a good mix. Most are about 12- to 18-handicap.”

Van Vliet has been a Plum Creek member since 2002 and is in his third year with the league.

“The first time I played this course I fell in love with it,” Van Vliet said. “It’s a good course for people who don’t hit the ball far. There are very few times that there are traps in front of the greens. It’s a very forgiving course. It’s a tough course because it’s a Pete Dye course and it’s all angles, and you have to play the right angles.”

Valentine is in his second year as a Plum Creek member.

“It’s a fun league, but there are some guys that are really competitive,” he said. “I have a 7-handicap for this year. I guess I’m considered an ‘A’ player. They have them categorized A, B, C, D. You get a chance to exercise and socialize.”

Noblesville resident Chuck Witt, 66, moved to the area from Valparaiso three years ago to be close to his daughter and two grandchildren. He joined the league when he moved.

“Not knowing anyone in the community, it’s been great to have friends around the golf course,” Witt said. “It’s a big part of my social life.”

Over the Hill Gang at Fox Prairie

Noblesville’s Fox Prairie Golf Course’s senior golf league is known as the Over the Hill Gang. 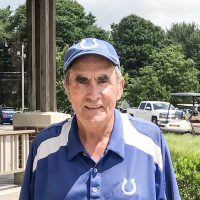 Pete Campassi, a 72-year-old Fishers resident, has been a member for 18 years.

“To be a bunch of retired people that play golf, you couldn’t’ ask for anything more,” Campassi said. “It’s perfect. You don’t call anybody. You don’t need to call for a tee time. The golf course has been nice enough to give us a block of times. Today, we had 25 golfers. Yesterday, we had seven. But typically, it’s anywhere from 12 to 28 golfers on a given day. Some play three days a week, some play every day.”

Campassi said everyone has a USGA-sanctioned handicap and then divide into teams. The league typically starts at 8 a.m. weekdays.

“We throw five bucks in a pot, play a little game,” he said. “You play with a different guy every day, which makes it neat.”

Campassi said he played 150-plus rounds in 2019. He has been playing five days a week this summer.

“Even before I retired, I was in a position where I could come out here, play and then go to my job,” Campassi said. “I think everyone is retired now. Some may do something else on the side.” 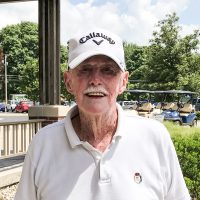 Prior to the pandemic, Campassi said everyone would sit inside and socialize after a round of golf. Some do gather at outside tables, but it’s not quite the same, he said.

At 89, Richard Farrell is the oldest golfer playing this year.

Farrell said he enjoys the flexibility of the league and friendships.

“I’ve been active all my life,” he said. “I ran a bowling alley for 50 years in Massachusetts. I started playing golf when I was younger and then gave it up for a while. I started again when I was 27 and played about every day for 50 years. We moved here in 2004, my two daughters and grandchildren are here.”

Noblesville resident Jim Astrike, 80, lives only a half-mile from the course.

“I love to play golf, and this is really handy,” he said. “It’s a great course. It’s one of the better municipal courses in Indiana.”

Fisher resident Jim Seymour, 72, who plays five days a week, likes the flexibility of the league.

“If I decided not to play tomorrow, I don’t have to show up,” said Seymour, who has been a member since 2006.