You are at:Home»Current in Fishers»Fishers Community»Fishers K of C golf outing raises funds for charities 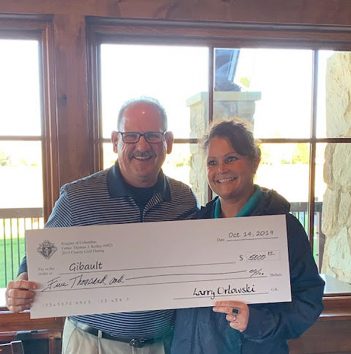 The 26th annual golf outing is set for Oct. 12 at The Sagamore Club in Noblesville. Ron Wesley, the golf outing’s committee chair, said it has raised more than $450,000 for the organization’s charities since its inception. Wesley said this is the second year it will be held on Columbus Day, with Sagamore offering lower prices to allow savings for golfers and generate more money for the charities.

“Typically, we had held the event on the Thursday following Labor Day, but positive feedback allowed us to keep this contracted date,” Wesley said.

The outing moved to Sagamore 10 years ago. Wesley said the event offers nonmembers of The Sagamore Club the chance to play a destination course designed by Jack Nicklaus while supporting his organization’s nonprofit groups.

Proceeds will benefit Indiana charities, including Gibault Children’s Services, Little Sisters of the Poor, The O’Connor House and other Knights of Columbus charities.

Gibault, located in Terre Haute, was founded by the Indiana Knights of Columbus in 1921 and serves children who have been victims of emotional or physical trauma and neglect. The Little Sisters of the Poor is an international congregation of Roman Catholic women serving the elderly poor in more than 30 nations around the world. The Little Sisters of the Poor operate the St. Augustine Home in Indianapolis.

“Golf has offered many people a way to establish some type of normalcy during this pandemic with social distancing measures in place,” Wesley said. “Therefore, having our event in the fall again should be successful, whether we provide box lunches and dinner arranged in a way with masking and spacing in place or have the usual sit-down lunch and awards dinner to be determined by the governing bodies during this pandemic.”

Registration is at 9 a.m., followed by a shotgun start at 11 a.m. Dinner and awards will follow golf. For more, visit kofc6923.org/golf.