You are at:Home»Current in Noblesville»Noblesville Education»Noblesville Schools could lose $5.6 million in funding; identifies positive COVID-19 cases in six schools 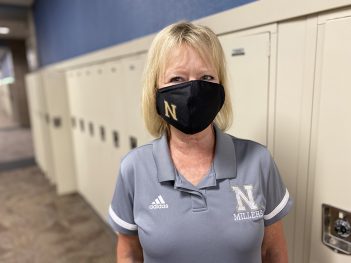 Noblesville Schools Supt. Beth Niedermeyer presented a comprehensive update on students’ return to school at the Aug. 19 school board meeting.

Niedermeyer said the district constructed a team comprised of administrators, teachers and parents, which began meeting in March. It conducted 22 meetings and created a survey for students, staff and parents.

“We knew it was a moving target, and in Hamilton County, as the (COVID-19) numbers increased, parents got nervous, even though in Noblesville our numbers are low,” Niedermeyer said.

As of Aug. 18, six of the district’s schools reported positive COVID-19 cases.

“Because of our protocols and planning and contact tracing, we were able to minimize the number of students and staff impacted,” Niedermeyer said.

When a positive case is identified, all parents and staff of that particular school are notified.

Preventative methods, such as no-touch scanners in the lunchroom, covered food, reimagined bus routes to accommodate one student per seat and enhanced cleaning procedures, have been established.

Niedermeyer said the positive cases are not coming from the school but from events outside the school.

“Contact tracing is taking it to an outside event, so we try to stress that really carefully with parents,” Niedermeyer said.

The pandemic also has significantly increased costs for the district, which was required to purchase masks, hand sanitizer and dividers for tables. It also has increased costs associated with cleaning and overtime hours.

As of press time, the district has spent approximately $231,000 on personal protective equipment and approximately $715,000 on additional staffing costs.

Moreover, state law mandates that schools can only receive 85 percent of their typical funding for students who are learning online for half of their education, which Niedermeyer said applies to all the district’s middle school and high school students.

To change the law, the Indiana General Assembly would have to do so in a special session.

“If the law is not changed, we stand to lose $5.6 million (in funding),” Niedermeyer said. “That is another pretty significant blow.”

Noblesville Schools does qualify for $429,468 from CARES Act Funding, but Niedermeyer said it costs the district $1.5 million to pay support staff for only one month.

“That puts it into perspective,” she said. “It’s a tiny, tiny bit of money that will help a little bit.”

Noblesville Schools also has submitted applications for FEMA funds, which could cover up to 75 percent of COVID-19-related costs, but Niedermeyer said she realizes FEMA funds are limited.