Dick Wolfsie recently retired after nearly 40 years as a TV personality. Most recently, he spent approximately 30 years at WISH-TV. A Fishers resident, he also is a columnist for Current Publishing.

Current Publishing recently caught up with him for a Q & A about his career, his retirement and what’s next.

How did you get into journalism?

“I was a high school (English) teacher, and after I taught for nine years, I got a call from a friend who was working as a producer in Columbus, Ohio, on a small cable station, and he asked me if I would spend my summer at his station doing some writing. I went down for two months, and at the end of two months, I called my principal and said, ‘I’m not coming home.’ Then somebody got sick one day, and they were desperate, and I took over hosting the show, and then I hosted the show for a year.”

What was going through your mind the first time you went on TV?

“I felt very comfortable. I had spent nine years in front of a classroom with kids. Teaching is like television. It’s a combination of education and entertainment. I didn’t know the technical stuff very well, like what cameras to look at, so if someone watched me, they would say, ‘He’s an amateur,’ but I was very good at interviewing people because that was what I had done for nine years as a teacher is talk to kids, so it was an easy transition.”

When you were a kid, what did you want to be when you grew up?

“There was a point where I wanted to be a veterinarian, but when I got into high school and started writing some comedy, I did really want to be a writer or a teacher, or a teacher of writing, something with teaching and writing. I graduated from college in 1969 and got a job as a high school teacher at my old alma mater, New Rochelle High School.”

How did you work your way to Indiana?

“I lost my job in New York, and my wife and I were really broke. New York paid well, but it also ate up all my money. I lived with my parents and lived with friends, and I saw an ad in the magazine for a job in Indy for ‘Indianapolis Afternoon.’ I came to Indiana in July or August, the summer of ’82. And I took the job. I was paired with Patty Spitler. After a year, the station was sold then to LIN (Media). Patty had already renewed her contract and I had not, so I was out of a job and she still had a job. She’s still at (Channel) 8, and I left 8 for a while for five years. That’s when I started ‘AM Indiana,’ a morning talk show. I stayed there for four or five years, and ‘AM Indiana’ goes off air, and the news director from Channel 8 called me and said he had an idea for something they could use me for. He had watched me over the years and thought I would be good at doing off-the-wall feature stuff in the morning. The interesting thing is, he said to me, ‘I don’t know how this can last very long,’ because how many things can you find at 5 in the morning? When I was 44 or 45, my photographer said to me one morning, ‘How much longer can you do this?’ in reference to my age, and I said, ‘If I’m still doing this when I’m 50, shoot me.’ And, of course, I finally stopped doing it when I was 73, so it lasted a long time.” 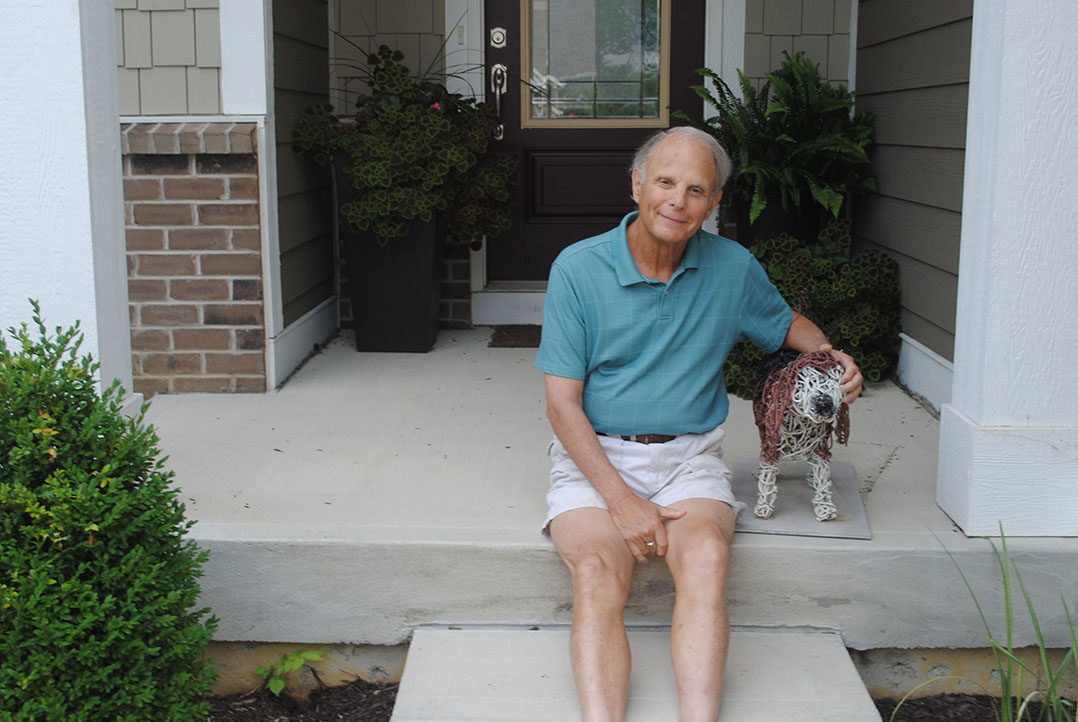 Dick Wolfsie pauses by a wire model of his dog Barney on his front porch. (Photos by Anna Skinner)

When did Barney come into picture?

“I found Barney (a beagle puppy) on my doorstep in February of 1991, which is about four months after I had been hired (at Channel 8). My wife and I put him in the house, and he was very, very bad, very destructive, and my wife didn’t want to keep him because we had a new house at the time. She said, ‘If you really want to keep him, you can’t have him home all day because no one’s home.’ So, I took him to work with me. Within a couple weeks, people started noticing him and next thing I knew, he was a celebrity. The two of us ended up doing shows every day from 1991 to 2003.

What made you want to keep him?

“He was a beagle puppy, are you kidding me? How can you not love a beagle puppy? People would say, ‘Oh, he’s such a good dog,” and I would go, ‘No, he’s a great dog, but he was not a good dog. He was terrible.”

What made you want to retire now?

“I still feel like a kid, but when the pandemic hit, I had to stop because I’m a cancer survivor and I was 73 years old. I felt great, but I thought, ‘I’m going to really have to stop for a while for health reasons.’ Even though I was feeling good, I knew I was in that group that was vulnerable. So, I stopped for two to three months and said to my wife, who also is retired, ‘I don’t miss this as much as I thought it would.’ It’s time for me to leave.”

You’ve had a rich career. How did you balance work life and home life?

“My wife was the VP of marketing for Community Hospital for many years, and then until she retired in 2013, she was director of career development at Butler University, so we both were working pretty hard. We have a son who’s now 32, and everything, it worked out fine. I wouldn’t say we have our separate lives, but we both had obligations like any couple.”

What are you going to do with your time in retirement?

“Sit here and watch the birds. I’m going to continue writing. I probably get more response from Current than anything, so I’m glad I’m back (after a hiatus during the pandemic). I jog a lot. I love to read. I’m a politics junkie, so I listen to and read a lot about politics. I was a golfer, and I thought that’s what would take up my time, but I got tired of that.”

What’s the last book you read?

What was the craziest thing you did on television?

“The craziest thing I ever did is I had a hair transplant on television. I also had the fire department put me in a pretend burning building. I’ve gone in a glider, I’ve bungee jumped. There’s an operation on your throat if you snore where they remove the uvula, and I had that done on live television.”