You are at:Home»Current in Fishers»Fishers Community»Fishers resident shares journey of faith

Susan N. Harris’ world was shaken when her husband, Brent, was diagnosed with Stage 4 cancer in June 2019.

“There were no signs or really symptoms this was happening until it showed up and it was already at Stage 4,” Harris said. 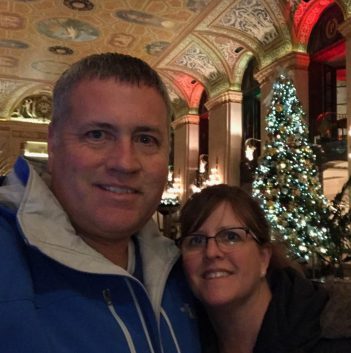 Brent, 52, died of mucosal melanoma five months later. Her journey led her to write a spirituality book to help others. “Thy Will Be Done” was self-published through WestBow Press last month.

Harris, a longtime Fishers resident, started writing a blog on Caring Bridge in September 2019 to keep family and friends updated on her husband’s condition.

“There are blog entries that I took right out of Caring Bridge that I had written, which are interwoven with things that I was going through as the caregiver,” she said. “I didn’t write those chapters until October or November. I didn’t think about making them into a book until January after he had passed away.”

The book recounts the Christian couple’s faith journey during the ordeal.

“Something like this tends to test your faith, and you are either stronger in your faith or walk away from it,” Harris said. “In our situation, it strengthened both of our faiths. It’s the kind of book I wish I would have had to read during the time. Most of the things I found were written from the patient’s perspective and not the caregiver’s. I didn’t start out to write a book. I was just writing how I felt. It was kind of cathartic for me what I was going through.

“My hope is people will read it and realize they are not alone and there is always hope, even if the story doesn’t end like you wanted it to. This clearly didn’t end like we wanted it to, but we are not without hope.”

Harris said she had displayed strength while caring for someone who is facing a terminal disease.

“A lot of my friends and family would see that strength and not see some of the brokenness I reveal in the book,” she said.

Harris had to display strength for their three children, Elaina, 21, Gretchen, 19, and Alec, 14.

“I had to be strong for Brent. I wanted to let him know that if he wasn’t going to make it that I was going to go on and take care of the kids,” Harris said. “He was very concerned if he didn’t come out of this cancer what was going to happen to the rest of us.”

Harris was a third-grade teacher at Heritage Christian but took a leave when her husband was diagnosed. She is remaining at home this school year. The couple met at Indiana University and married in 1991.

The book is available on Amazon.com and westbowpress.com.