Many residents on Anthony Road in northern Westfield have lived in their homes on the scenic road for several years. Most moved to the area because of the spacious lots and picturesque views. Now, residents fear the aesthetics will fade with the proposed NorthPoint II, an industrial development northeast of U.S. #1 and 196th Street featuring businesses such as Gordon Food Services, Bastian Solutions and Abbott Labs.

“My husband is fifth-generation Westfield, and our kids are sixth generation,” resident Melissa Hinshaw said. “We made a conscious choice to move out to this area 13 years ago, and at that time, the comprehensive plan had allocated this area for only rural and agricultural use.”

Residents on Anthony Road, which is north of Ind. 38, are Westfield Washington Township residents, not city residents. Hinshaw said she feels as if WWT residents aren’t protected due to a 2018 interlocal agreement that allows the City of Westfield to oversee zoning in the township.

“When the city begins to infringe on the township, I thought it’ time for someone to stand up and say no,” Hinshaw said.

Anthony Road stretches between MacGregor Park and Bray Park, which were both donated by longtime residents to preserve the aesthetics of the area.

“I feel like putting a warehouse between these two parks desecrates the generosity and the memories of these two families,” Hinshaw said.

Resident Tim Armstrong, who also lives on Anthony Road, uses his 3-acre property as a refuge for rescued alpacas, goats and a pig. His property is adjacent to the proposed NorthPoint II development northeast of Ind. 38 and Anthony Road.
“Where they want to develop NorthPoint II backs up to my entire yard and pasture,” Armstrong said.

A portion of Armstrong’s property has already been acquired by the city to allow for a new intersection at Anthony Road and Ind. 38 for the East Street expansion.

“We use those trees as privacy. Those trees are now going to get wiped away,” Armstrong said. “When they do this intersection, there isn’t going to be any kind of sound barrier. We are losing a ton of trees. We’ve rescued alpacas. It’s a hobby farm for us, and alpacas don’t really like a lot of noise and activity. They’re used to a quiet environment, and it can stress them out and make them sick.”

So far, Anthony Road residents haven’t been contacted about the proposal, which is expected to be introduced to the Westfield City Council during its Sept. 8 meeting.

Hinshaw didn’t receive any communication from NorthPoint II developers until after the neighborhood meeting.

“We were told at that time, and for as long as we have lived here, that north of State Road 38 was off limits,” Hinshaw said. “They didn’t want to bring utilities here, and they weren’t going to develop this land. Anything north of State Road 38 is a hard stop. They’re doing the exact opposite of what they originally said they would be doing.” 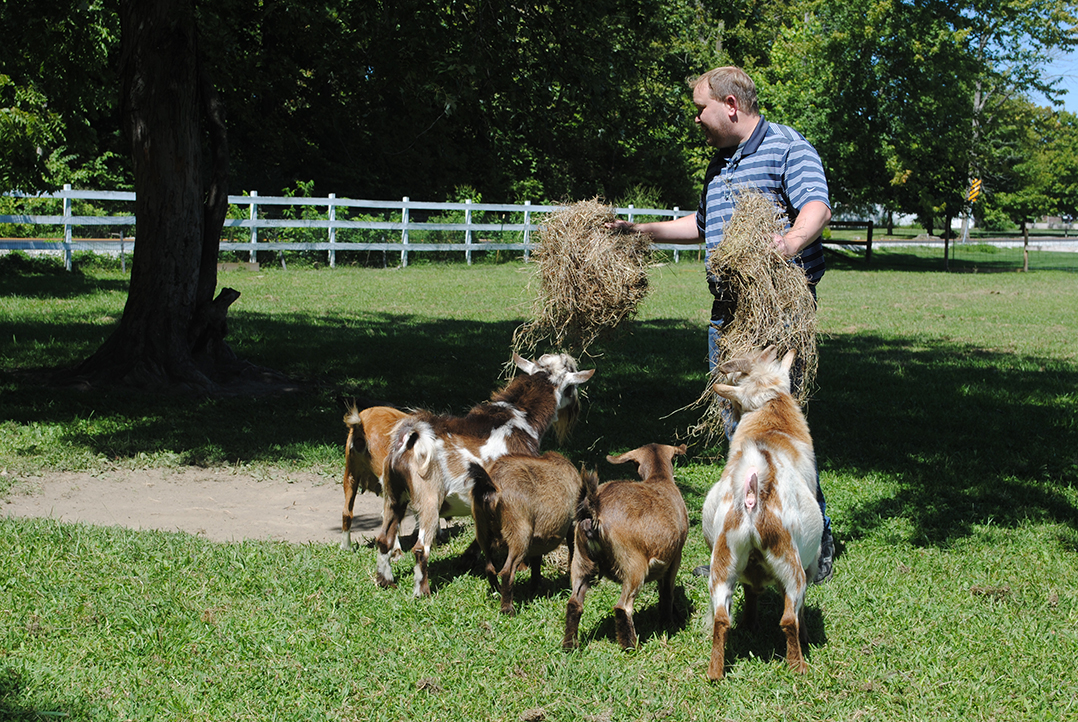 Tim Armstrong feeds his rescue farm animals, including alpacas, goats and a pig.

“I look at it and think, ‘Is anything sacred?’ Are there any stopping points or anything worth protecting? I’m a business owner, so I’m on both sides,” he said. “I built my own warehouse, but every business owner lives somewhere, too. If Westfield is trying to attract business owners and attract developments and businesses, well, one of the things that attracted us here was the home we got and this rural setting we wanted to move our family into.”