Amy Q. Barker has always been a voracious reader.

“I’ve always read classics, a lot of books that are 100 years or older,” said Barker, who lived in Carmel for 22 years before recently moving to Unionville. 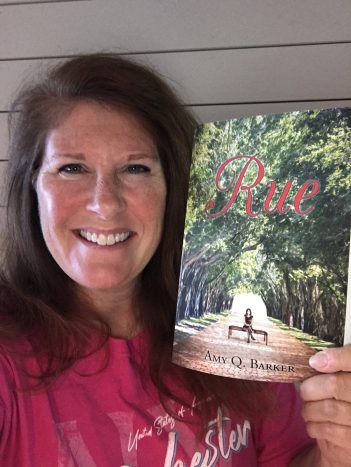 So, when looking for a genre she might try her hand at writing, she started to explore reading more modern books, including Westerns, mysteries and crime novels.

“The main motivation I wrote ‘Rue’ and all the other books I’ve started to write is, I wanted to find a book that I would want to read, which is women’s fiction,” she said. “I do struggle to find my types of books for my target audience, which is why I end up reading the older classics.”

“Rue” was self-published July 30 with the help of an editor who assisted with grammar. The story centers on a blind lounge singer in San Francisco and three other main characters.

Barker said her target audience is women ages 25 to 55. One of her goals was to publish “Rue” before her 50th birthday, which was Sept. 1.

“I’ve been wanting to write novels as long as I can remember. That’s why I chose to be an English major in college,” the Syracuse University graduate said. “I thought I would come out of college and be a writer. I was always a diary writer and I used to write poems, but I never really tried writing a novel until four years ago.”

Barker woke up one morning determined to do it.

“I decided I was going to do it every day, and I’m not going to let anything or anybody stop me,” she said.

She started getting up at 4:45 a.m. and wrote for two hours before going to her day job.

She had written another manuscript before “Rue.”

“The first one is somewhat autobiographical because when I first started writing, I didn’t know what else to write about,” she said. “After that, it morphed, and I tried to find other subjects I found interesting that were nothing about me. When I wrote ‘Rue,’ I literally made up every character in the book. I like to weave together completely original stories.”

Barker has written five other stories that have not been published.

“I don’t know if I’ll publish all five, but will publish some over the next several months,” she said.

The book is available on Amazon. For more, visit amyqbarker.com.