“I live in a two-story house on a half-acre and I take care of it all,” the Carmel resident said. “I sold real estate for F.C. Tucker for 33 years and retired three years ago.”

To stay active, Gallagher teaches swimming to children and adults at Carmel Racquet Club as she has since 1975.

“Sometimes I think, ‘Do I have to stop what I’m doing to go teach?’” she said. “When I’m there, I absolutely love it. The kids seem to really like me. I’ve taught lots of kids of parents I’ve taught.”

“(Meyer) said, ‘My grandsons are coming to town for four weeks. Will you teach them to swim while they’re here?’” Gallagher said. 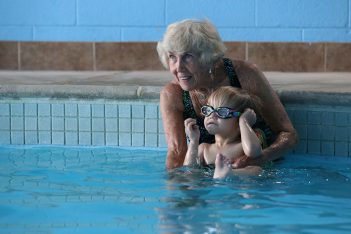 Marty Gallagher works with Grant Simpson during a swim lesson at the Carmel Racquet Club. (Photo by Ann Marie Shambaugh)

The Simpsons came to Indianapolis from their home in Chicago in August to work virtually during the pandemic.

Simpson’s sons Wesley, 5, and Grant, 2 1/2, took lessons from Gallagher during their time in Carmel.

“They’ve fallen in love with Marty,” Meyer said. “Marty is awesome. She is off the charts.”

Gallagher was pleased to be back teaching since her usual lessons were shut down when the Racquet Club closed in mid-March because of the COVID-19 pandemic.

Gallagher started her career as a physical education teacher after college.

“Swimming was always my specialty,” she said.

She participated in synchronized swimming clubs at Cincinnati Woodward High School and the University of Cincinnati.

After graduating from UC, she landed her first teaching job at Walnut Hills High School in Cincinnati.

When she moved for her then-husband’s job, she taught at Swarthmore (Pa.) College, filling in for an employee on a sabbatical for a semester. She then taught at Temple University in Philadelphia.

Gallagher took time off to have children and then got a call about teaching swimming at a new Main Line YMCA in Philadelphia.

“I taught there about six years and then we moved to New Jersey and I taught at the Red Bank YMCA,” she said.

Gallagher moved to Carmel in 1973 and began teaching at the Jordan YMCA in Indianapolis.

“But the classes were big and the water was cold, so when I was playing tennis at the Carmel Racquet Club and feeling the nice warm water, I said, ‘Hey, can I teach some swimming lessons here?’” Gallagher said.

That was 45 years ago, and she has never stopped.

“I’ve taught a lot of kids, and then their (foreign-born) parents said, ‘I didn’t have the opportunity to learn. Will you teach me?’” she said.

“Sometimes it’s better when they are at least 3. Going through the terrible twos isn’t good,” Gallagher said. “But if you have an older sibling, it’s much easier if the other child is in the water and they see what they are doing. I don’t separate them according to ability because my classes are usually no more than five. We take turns, so I work at each one’s level. My main thing is to get them to do the front crawl and swim on their back. I’ve had kids that want to learn breaststroke and butterfly. I can teach all of that.”

Gallagher’s swimming classes are scheduled to start this fall.

“I’m not sure how many students I’m going to have with the virus,” said Gallagher, who had to give up tennis two years ago after her second rotator cuff surgery. 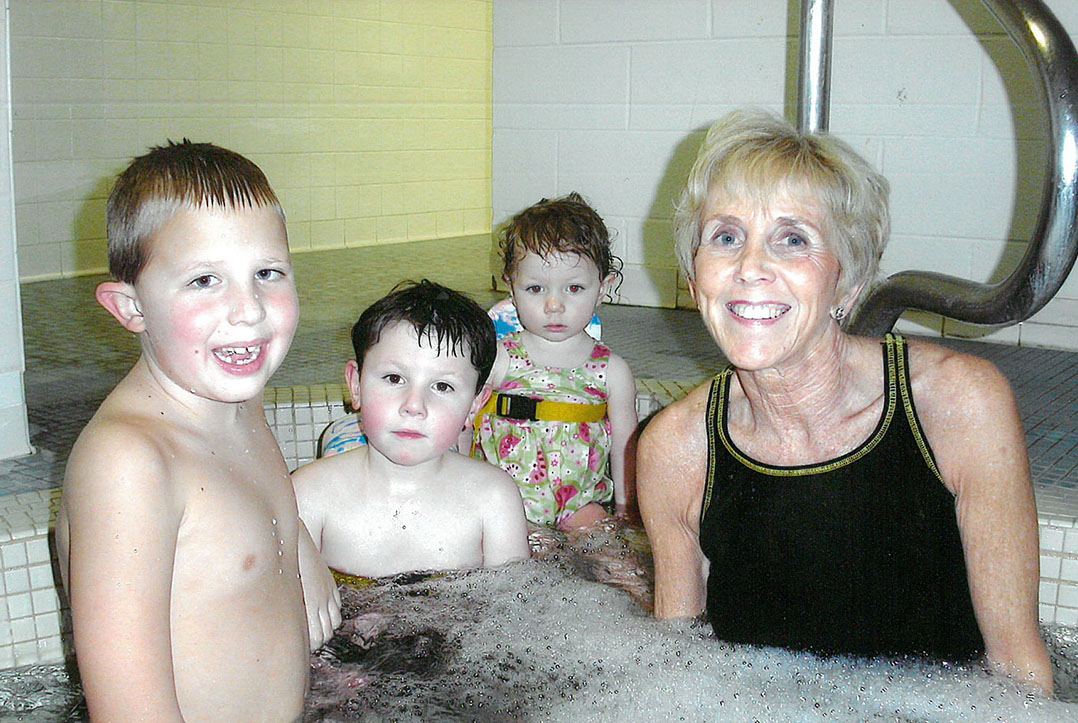 Gallagher’s children took after their mother in the water.

“They were all wonderful swimmers, needless to say,” she said. “They were all born in Philadelphia and they all wanted to get back to the East Coast. They all graduated from Carmel High School. Scott, my oldest, was a swimmer and played hockey. Skip was a diver, a runner and pole vaulter, and Jill was a diver and gymnast. Her gymnastics coach said she couldn’t do both. They all swam for the Jordan YMCA because it had a better team than the Carmel Swim Club when we first moved here.”

Gallagher taught her three grandchildren, Jill’s son, Lucas Simerman, and Skip’s son, Galen, and daughter, Grace, how to swim. Scott lives in Denton, Md., Skip is in Boston and Jill is in Jacksonville, Fla.