You are at:Home»Current in Carmel»Carmel Cover Stories»Serving a purpose: Pandemic accelerates interest in pickleball locally, nationwide

Pickleball has become increasingly popular in recent years, and the COVID-19 pandemic has accelerated that growth.

A blend of badminton, Ping-Pong and tennis, pickleball is played with a paddle and a plastic, Wiffle-like ball and can take place on a variety of courts.

“Pickleball is one of those sports that has been really popular during the pandemic. Anyone can play it. It’s a multi-generational sport. People have been buying portable nets and setting it up in their driveways or streets,” said George Bauernfeind, managing director of marketing and communications for USA Pickleball. “You can also play relatively safely, more safely than some other sports. It’s the size of a badminton court, about a third of a tennis court, so you don’t need much space.”

Bauernfeind said the organization’s membership has grown tenfold since 2013, when it had 4,000 members.

“The reason for this massive growth is that, one, pickleball is very easy for beginners to learn. If you’ve done any kind of paddle or racquet sport, you pick it quickly,” Bauernfeind said. “Two, it’s also really great exercise, but not overly demanding. And three, it’s fun, social and friendly. People become somewhat addicted to it because you can play seven days a week if you want and it’s not very taxing.”

Interest in the sport has surged locally. Carmel resident Emily Frank plays pickleball regularly with a group of 30-plus women who enjoy the sport.

During the summer, a friend of Frank’s husband invited her to join the group, and Frank has been playing three to four times a week ever since.

“It’s a really fast learning curve. It’s not like this is a sport that we’ve been playing for our whole lives,” Frank said. “There’s this huge number of people who are eager to be outside, to interact safely and get some social time with people who are like minded.”

Pickleball also cost-friendly, as there are plenty of free, public courts available in spaces throughout the city. A basic paddle can be purchased for $20 online.

“The thing about pickleball is that it’s a much more casual sport than tennis,” Frank said. “It’s not as formal, and the games are a lot shorter than tennis matches. It’s great exercise and it’s great for people as they get older when their joints get weaker and it’s harder to run around.”

Although pickleball is usually enjoyed as a casual recreational sport, it can also be played competitively. Jeremy Rosenstein, a pickleball coach from Indianapolis, has attended tournaments across the nation.

“It’s more of a social game. The best part is, it’s a smaller court, so you don’t have to be as mobile. That way it’s better for all ages,” Rosenstein said. “You can get into a whole rip-roaring of rallies at the net and all levels of plays can be involved.”

Frank said despite working full time, she can still spend her evenings socializing on the pickleball court.

“It’s hard to make new friends as an adult in a city where I’ve lived in my whole life, but I have met the nicest people, and they were so welcoming,” she said. “I don’t know if it’s just this group or the mentality of pickleball, but it’s just fun and relaxing.” 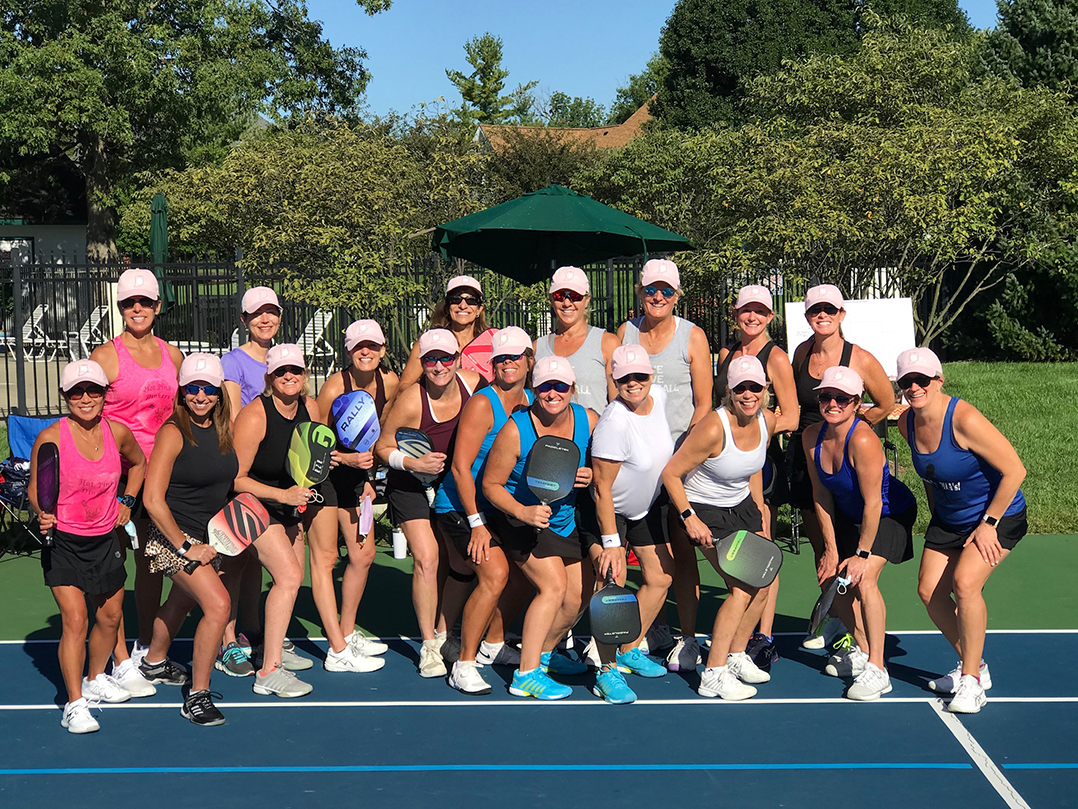 Pickleball has grown in popularity in Carmel in recent years, as groups have formed across the city to play it. (Submitted photo)

A mixture of badminton, Ping-Pong and tennis, pickleball is played with a paddle and a plastic, Wiffle-like ball. It can be played on a variety of courts. It can be played as singles or doubles, and games usually last approximately 20 minutes.