This will be a little different from Charlie Ballantine’s last appearance at the Palladium at the Center for the Performing Arts in Carmel. 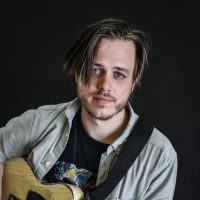 Charlie Ballantine will perform Oct. 23 in the Live at the Center series. (Photo provided by Mark Shelton)

“This will be completely different because I think it was completely sold out that night,” Ballantine said.

This time it will be live with no in-person audience.

The Charlie Ballantine Quartet will be the first performers in the “Live at the Center” series at 8 p.m. Oct. 23 at the Palladium. Register for the free livestream at thecenterpresents.org.

“These days we’re just happy for any opportunity to play some music for people, whether it’s in person or via livestream, let alone like a place like the Performing Arts Center,” Ballantine said. “We’re excited to play in that beautiful space.”

“It definitely will be a mix of some jazz standards, some original music and some of our favorite covers,” Ballantine said. “We’re just going to have fun playing music for an hour or so.”

The music will be all instrumental, with Ballantine on guitar,

“We started a successful house concert series at our house where we had about 50 to 80 people spread out in our yard,” Ballantine said. “We had livestreams at the Jazz Kitchen and Chatterbox Jazz Club. We had some private events because as much as we miss it as musicians, music lovers and audiences feel just as deprived.”

The other members of the quartet performing at the Palladium will be Cassius Goens (drums), Amanda Gardier (saxophone) and Jesse Whittman (bass).

“I hope this is an opportunity to get some of the northside listeners into it,” Ballantine said of their jazz style.