Carey recently married her husband, Spencer, in a barn on their Sheridan property, and she wants to eventually use the space as a wedding and events venue. She thought a great way to test the idea was to have a Halloween drive-thru open to the public, which will be the first event outside of the Careys wedding at the barn. Families will be able to drive through the exhibit from 7:30 to 9 p.m. Oct. 23-24 and Oct. 29-31. Admission will be $10 per carload.

Two barns will be decorated in a family friendly way. Families will enter the property at 2060 W. 291st St., Sheridan, and follow the signs to drive through the first barn, which will be Disney themed.

“It’ll be for younger kids,” Carey said. “There will be decorations for ‘The Jungle Book,’ ‘Beauty and the Beast,’ ‘Frozen’ and just different Disney characters.”

Visitors will pass by a cemetery display and drive through a second barn, which will have spookier decorations such as Frankenstein and skeletons. They will exit then through the driveway.

Most of the decorations for the event came from garage sales. The cemetery decorations came from Carey’s grandmother.
“She did a huge production every year and it just became too much work, so she’s letting us borrow it,” she said.

Carey thought about offering a Halloween drive-thru since September. Originally, she wanted to decorate the barn as a haunted house people could walk through, but COVID-19 ruined those plans, so she decided to keep families in their cars instead.

“We started buying stuff and putting it all together last weekend,” she said. “It took a long time to organize which barn the decorations would go in, and where in the property we would set it up. I can finally see it in my head. My mom can always envision things and say, ‘That’ll look perfect there,’ and I don’t have that. Now, as things are coming up, I can see it in my head.”

Carey, who attends nursing school at IU Kokomo, said the decorating has turned into a full-time job on weekends. There also will be a pet cemetery and dancing witches.

At the end of the drive-thru, Carey wants to find a way to distribute candy while being COVID-19 conscious.

“We would like to, but it’s still up for debate,” she said. 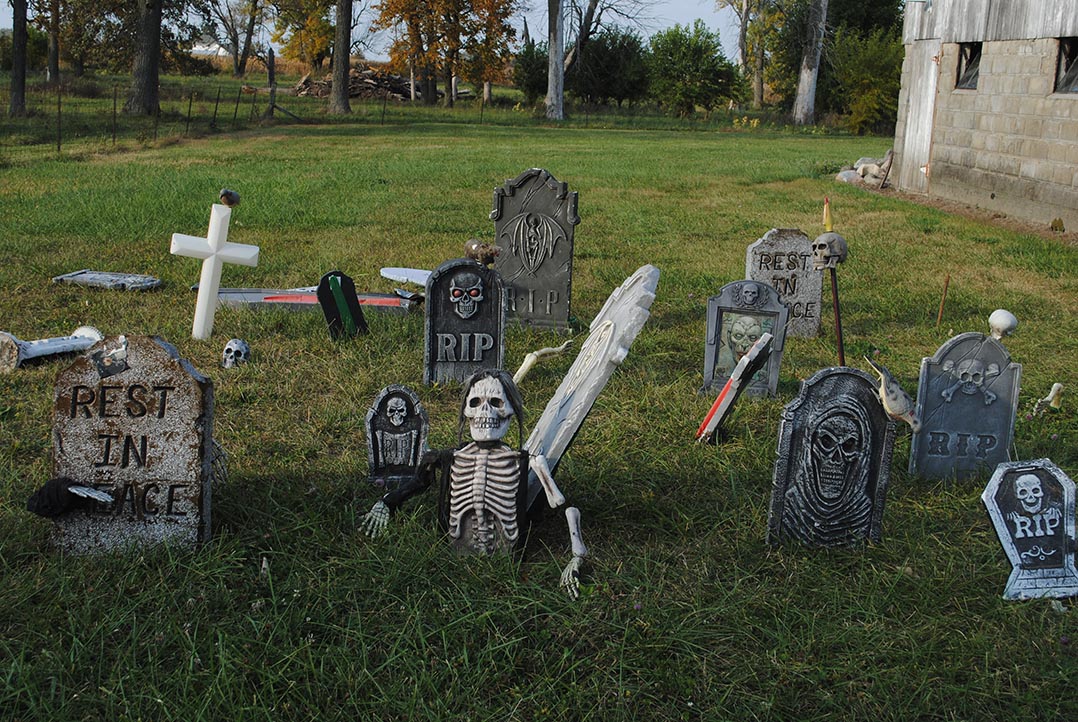 One of the graveyard displays.

Sheridan resident Andrea Carey wants to eventually use her barns for her business, Our Barn.

“Spencer’s sisters both got married in a family barn, and I always thought it would be a good business – rustic barn weddings,” she said. “We had this barn on the property and I fell in love with it. It’s so beautiful, and I thought it would be perfect for people to get married here or have a party and rent a couple levels.”
The barn has five levels. The Carey’s home property is 10 acres. They farm 70 surrounding acres. Spencer Carey is a farmer with the family farm, Carey and Sons, which grows corn and soybeans.

The Careys moved to the property in April. They were married Aug. 1.

“We bought most everything (for our wedding) instead of renting it, so now we own it,” Carey said. “My dad made the tables, and we bought all different wooden chairs, all the light fixtures, all the plates and mason jars. We have like 300 Mason jars. My colors were sage and blush, and we have some stuff left over with a few colors, so people who get married here can choose from those or bring their own to decorate.”