Schuyler Bradley will be remembered as a consummate teammate and friend.

The 2019 Carmel High School graduate died early Oct. 17 in Tuscaloosa, Ala. Bradley, an Indiana University sophomore, was shot early that morning reportedly while trying to break up a fight while on a visit to Alabama, where he planned to attend Alabama’s home game with Georgia later that day. The alleged shooter, Zachary Profozich has been charged with murder. 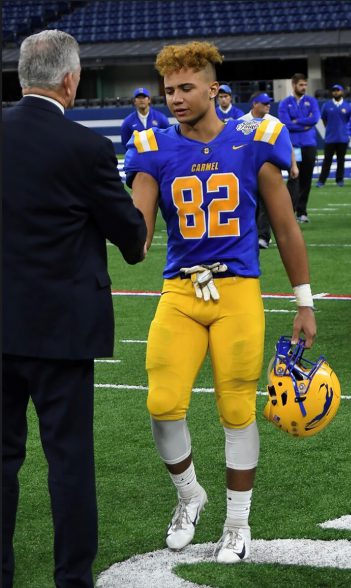 Bradley, 19, was a tight end/wide receiver for the Greyhounds during the 2017 and 2018 seasons after transferring from Cathedral.

“He was a guy that had countless personal relationships inside our locker room,” Carmel football coach John Hebert said. “He was a fierce competitor and tough player, but most important to his teammates was the endless support he showed them. He had a really great sense of humor and could always make his teammates laugh.”

“He was a magnet for friends and the outpouring of love for him in the last couple of days shows the impact he made on other people,” he said. “Our thoughts are with his family and all of those impacted by this tragic situation. Forever a Greyhound.”

Bradley’s mother, Daphne Groff, had traveled to her son’s bedside and was there when he died.

Groff returned to speak at a candlelight vigil Oct. 18 in Bloomington. She told the assembled crowd her son had fought hard to live.

“It’s the first time in my life I couldn’t save my baby,” she said at the vigil. “Now, he is up there in peace, throwing that football 75 yards, throwing that basketball, telling God he is cheating but that’s how he is going to live.”

A family friend has organized a GoFundMe campaign to pay for his hospital bills, funeral costs, transportation and housing costs for the family. As of Oct. 22, $60,600 had been raised, well above the $50,000 goal.

Bradley was attending IU on a scholarship as part of the group scholars program. He was a member of the Acacia fraternity.