You are at:Home»Night & Day»Artist Profile»Carmel resident’s passion for art led to novel on Pompeii
A nearly three-decade passion of Sandra C. Hurt’s was ignited by a women’s study group.
Hurt attended a lecture by a former Butler University instructor on the topic of women in art through the centuries.
“I was taken away by a fresco of a woman,” Hurt said of paintings displayed on the walls on plaster. “I’ve never been the same since. These frescoes really spoke to me. I had an interesting experience. Her face haunted me. I couldn’t get over it.” 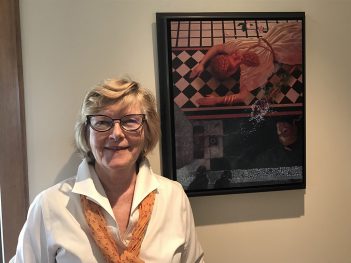 Sandra C. Hurt pauses in front of her artwork. (Photo by Mark Ambrogi)

Hurt began researching the history of Pompeii, an ancient city near Naples, Italy, through numerous books and eventually visits.
The Carmel resident’s “Priestess of Pompeii, The Intimate Journey” is her first novel. Hurt finished the book in June. It was self-published in August. She is working on a second book in the series.
Pompeii was destroyed by the volcanic eruption of Mt. Vesuvius in A.D. 79.
“She really expressed the attitudes of the women of the day,” Hurt said of the fresco. “They know only her name and they think she owned the villa. The frescoes represent a women’s ritual to the (greek god) Dionysus.”
A couple years after seeing the frescoes, she took an art history course at the Indianapolis Arts Center. The center had a trip to Pompeii and the Villa of the Mysteries on the outskirts of Pompeii
“I got to see the frescoes in person and was dumbstruck, too,” she said. “I had read a lot about it by the time we went but it was an inspiring experience.”
Hurt started on the book Jan. 1, 2000. She presents the priestess, Rufilla Istacidii, as a real person who was adopted by wealthy family, so Hurt set the story in her historic time of the first century B.C. It was the era of Julius Caesar, who is included in the novel.
“But nothing else is known about her, so that’s perfect for a novel,” she said. “The story evolved, and I’ve been there several times and other places in Italy as well as Greece. In the book, she does a coming-of-age journey when she goes to Greece. The only information that I did find is she really was a priestess of Venus, who was the patron goddess of the City of Pompeii, and she was also a priestess of Dionysus. They think she was the one that conducted the initiation ritual.”
The priestess’ father was written as a military member and equestrian.
Hurt, who had been trained as a nurse, had not taken classes growing up about the classics, so she took courses at Indiana University in Bloomington and IUPUI. The classes also included creative writing.
Hurt had been writing short stories and poetry her entire life.
Hurt and her husband, Stan, who owned a distribution center for heating and air conditioning which he sold, have lived in Carmel since 2008. Her husband went with her on the first visit to Pompeii, but she has since traveled several other times with women’s groups and a friend.
“I took tours with travel companies who hired archeologists to guide and give lectures on the Roman and Greek ruins we visited,” she said. “Pompeii is an ancient city that is still revealing her fascinating history.”
For more, visit sandrahurtauthor.com.
Share. Twitter Facebook Google+ Pinterest LinkedIn Tumblr Email
Previous ArticleBoone County reports record COVID-19 cases
Next Article Make a ‘JOYful’ move for ‘JOYnts’